Dr Gideon Assan: Tribute to children living with Down Syndrome and their caregivers - MyJoyOnline.com

Dr Gideon Assan: Tribute to children living with Down Syndrome and their caregivers 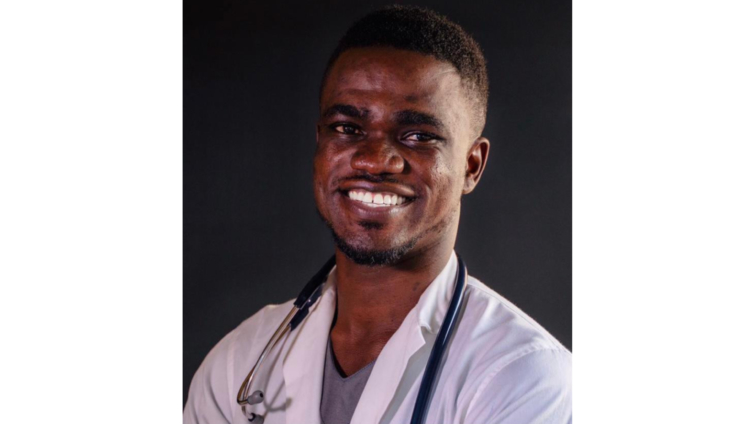 He stood about 4 meters away from the baby’s cot. In his right hand was a red pen and the left, a white assessment sheet.

“You can start when you hear the bell. You have 5 minutes to examine this baby and three minutes to report your findings,” Dr Emmanuel Okai, my lecturer and paediatrician, pointed to the bouncing baby boy in the cot.

I took a quick look at the baby in the cot and smiled. What Dr Okai did not know was that two days before the day of the exams, I visited the ward to familiarise myself with the medical conditions of the babies and how they were responding to treatment.

As soon as I entered the ward, my attention was drawn to the deafening cry of this same baby boy at the far right corner, his back being tapped gently by a 46-year-old woman dressed in an orange top and a black skirt. A woman I later got to know as the mother of the baby. Let’s call this woman, Belinda.

This article is inspired by Belinda. A tough woman, a bulldozer, a quintessence of hope and endurance, and a paragon of persistence. For 20-years, she’s been looking for a baby to call her own and when she finally got one, doctors told her that the baby she waited so long for had a condition called Down syndrome.

In the next few minutes, I will attempt to explain to you what this condition is about. I will again tell you Belinda’s last words to me before I left the ward and I will conclude with my score in that pediatric exam.

What is a Down Syndrome?
Down syndrome was named after John Langdon Down, the English Physician who first described the condition in 1866.

Although his description was clear, it was not until the 20th century that the exact cause was established. It is actually one of the most prevalent chromosomal disorders worldwide and the leading cause of intellectual disabilities in children, occurring in about 1 in 600-1000 births.

All cells in the body contain genes. These genes are found in chromosomes. Typically, there are 46 chromosomes in each cell- 23 inherited from the mother and 23 from the father.

Down syndrome occurs when some or all of the person’s cells have an extra full or partial copy of chromosome 21. So instead of 46 chromosomes, the person with Down syndrome has 47.
Maternal age (35yrs+) is the only recognized factor that has been linked with an increased chance of having a baby with down syndrome.

What are the signs and symptoms of Down Syndrome?

To make it simple, I’ll group them under the following headings: Physical, Neurological and others.

For any trained medical eye, the physical features of a person with Down syndrome are hard to miss. They include but not limited to the following; a flattened face, short neck, small ears, a tongue that tends to stick out of the mouth, small hands and feet, a single line across the palm of the hand, extra space between the big toe and second toe and stunted growth.

Apart from their physical features, people with Down syndrome may also battle with intellectual defects. According to research by Megarbane et al (November 2013), the average intelligent quotient (IQ) of a young adult with Down syndrome is equivalent to the mental ability of an eight or nine-year-old.

As they age, their neurological function even becomes worse than their age mates. They may struggle to talk or even understand speech.

Again, people with Down syndrome are at increased risk of epileptic seizures and many who live 40-years or longer develop Alzheimer’s disease.

There are other signs and symptoms of Down syndrome worthy of note.

First, about half the number of newborns with Down syndrome have a congenital heart problem (Ventricular Septal defect).

Secondly, people with Down syndrome have an increased risk of having cancers, top of the list being testicular cancer.

Again, they are also at increased risk of having Hirschsprung disease, a disease where nerves are missing from parts of the intestines leading to constipation and abdominal pains.

Can Down syndrome be detected before birth?

There are two basic tests that can be done to detect Down syndrome during pregnancy: The screening test and the diagnostic test.

I am by this article admonishing every pregnant woman to get screened for any chromosomal abnormality within 10-12 weeks of conception. Your health care provider will assist you in making any decisions if there are any worrying signs.

So what should Belinda and other parents similarly placed do to mitigate the medical and social effect of this condition?

First, it is important to recognize that such a child is a special child. This recognition is crucial to how you see and handle the baby. If a child is diagnosed with this condition, you would have already failed if you expect any form of normalcy from him or her.

As the baby grows, you will need to pay particular attention to his or her physical and intellectual development.

Feeding issues: Be patient with the baby. Learning to breastfeed or even suck the bottle may be of a challenge to him or her. Give him or her some time and eventually, he will be good at it. It will also be advisable to seek help from the nurse or your doctor if you are unable to handle that circumstance.

Heart issues: I mentioned earlier that these children are at an increased risk of developing heart problems. After an expert’s assessment, the baby may require surgery in the first year of life. Be rest assured that most cardiologists will be willing to monitor your baby with you as he or she grows up.

Hearing issues: Some babies may have partial or even full hearing loss. It is important you monitor your baby in that regard. Does he or she startle to noise? Does he turn to you when you speak? A complete hearing assessment is important in this case and for some, the use of a hearing aid will be very beneficial to them. Turning a blind eye to their hearing challenges will have a negative effect on their speech development too.

Babies with Down syndrome may also benefit from special schools. These are schools that enhances strong visual awareness and learning skills. These schools pay attention to the needs of the children and come up with strategies that work for the overall cognitive ability of the child. When a lot of attention is given to such babies, there is almost always a significant improvement in their intellectual capacity.

Parents of children with Down syndrome should not forget to take care of themselves too- their children will need them. There is a tendency to get frustrated at a point so it is important to gather social support. Parents of babies with Down syndrome should not hesitate to seek counselling support anytime their mental strength fails and their eyes tear up from emotional fatigue.

These babies are not cursed, neither are they a sign of bad luck. They are like any other child. They deserve respect, they deserve love and they deserve all the help they need. They are admittedly difficult to raise but they are unique in their own way. A simple smile from them is not simple, it is a glorious sight to behold.

Even though I could see how disturbed Belinda was because of her baby’s condition, I could also see her eyes lit with the excitement of being called a mother after 20years of waiting and wishing.
Belinda was ready for the days ahead. Her son was definitely going to become the best he could ever be.

I remember her last words to me before I left the ward to prepare for the exams, “I hope doctors can find a cure for this condition in future”
I hope so too, that one day, a lot of unanswered questions in medicine would be answered. In that exams, I had already met the baby 2days earlier so his clinical findings were staring right at me. Lucky me!! I did not see the exact marks Dr Okai gave to me afterwards but what I did see was the smile of this unique child once again.

The writer, Dr Gideon Assan, is a young medical practitioner with a particular interest in health advocacy and digital health. He can be contacted via email at gidi.kbassan@gmail.com