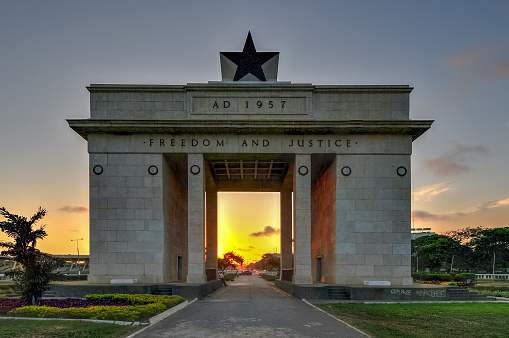 The Independence Arch of Independence Square of Accra, Ghana at sunset. Inscribed with the words "Freedom and Justice, AD 1957", commemorates the independence of Ghana, a first for Sub Saharan Africa.

How and why is Malaysia’s economic planning and its implementation yielding results? The country’s series of half-decade plans have been in synchrony with long-term objectives of what is called: Outline Perspective Plans (OPP) which spanned from 1971 to 2010.

It is however important to note that the country has enjoyed a much more stable political atmosphere. Besides its government’s commitment to implementation of its development plans, the political stability has been instrumental in the delivery of its results.

In the case of Ghana, there have been disruptions in the implementation of our economic plans due to a heavily polarised political system since independence. The blueprints for economic planning have been medium-term strategies, and political party manifestos, or if you like, promises.

The incidence of poverty reduced from 36% in 1988 to less than 5% in current time according to Ghana Living Standards Survey reports. But the expansion of vocational and technical education, increasing credit access and the relevant technology access to the informal sector agenda of Vision 2020 have been shelved for different political objectives after the first government of the Fourth Republic’s tenure ended.

The country failed to start the implementation of the 40-Year Development Plan put together by the government of former President John Mahama in 2014.

This is the case because of unnecessary politicisation of development agenda promoted by the 1992 Constitution of Ghana (I will explain this in subsequent paragraph). In fact, the largest opposition political party at the time: the New Patriotic Party (NPP), did not participate in formulating the 40-Year Development Plan.

Fast forward to 2016 when the NPP was elected, the plan was abandoned. This is what I mean by unnecessary politicisation of economic development plans. There is hardly buy-in of potential managers of the economy. But the question is; have political party medium-term development strategies, and promises, brought about the desired development?

Similar to Malaysia, the National Development Planning Commission (NDPC) established by Act 479, 1994 was given the mandate to plan, monitor, evaluate and coordinate Ghana’s development programmes and policies. Articles 86 and 87 of Ghana’s 1992 Constitution state that the NDPC shall be responsible to the president and shall also perform such other functions relating to development planning as the President may direct.

This has given governments the liberty to abandon well-meaning development programmes conceptualized or started by previous governments, to pursue their own political development agenda. How has this constitutional provision served the interest of Ghana? What can we imagine as ideal in respect of economic growth and development?

These are two very important questions that in my view will lead us to a point of deep reflection and realization that we need to pull the brakes on leaving economic planning, and its coordination solely in the hands of political parties.

In 2010 a committee was constituted to review the 1992 Constitution. The Government’s White Paper on the Constitutional Review Committee (CRC) report, was very disappointing, to say the least, from the perspective of a citizen who views nationalism as more important than partisan politics. Government in the White Paper rejected several of the committee’s recommendations.

They are ways which could be useful in developing segments of the economy. It is therefore illogical to reject the CRC’s proposal on the basis that successive governments will be forced to implement ideologies and policies of a particular political party.

Now imagine this: let us have a comprehensive long-term development plan with realistic targets and milestones, prepared in broad consultation with all stakeholders. Let us re-examine the 1992 Constitution and make the NDPC independent of Executive control. Let the NDPC coordinate, monitor and evaluate implementation of the development plan, provide technical support, and report Government’s performance in relation to implementing the development plan to the Ghanaian people.

We cannot continue to run this country on political party promises that are popular and over-ambitious and medium-term development strategies that lack adequate consultation. For a heavily polarised country such as ours, we need a referee to manage our economic development planning.

DISCLAIMER: The Views, Comments, Opinions, Contributions and Statements made by Readers and Contributors on this platform do not necessarily represent the views or policy of Multimedia Group Limited.
Tags:
Eben Carboo-Hartog
economis development planning
Ghana Economy