Ebo Whyte’s Roverman Productions out with 50th play ‘He said; she said’ 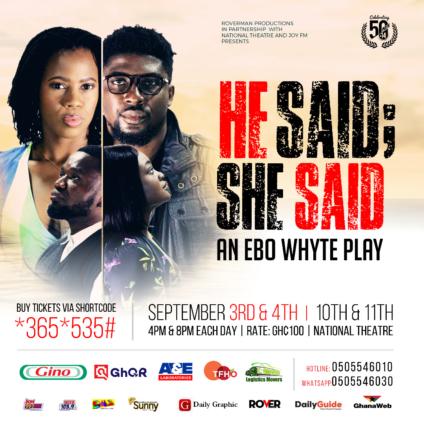 It is that time of the season and Ghana’s biggest theatre production house in partnership with the National Theatre and Joy FM proudly present a masterpiece dubbed ‘He said; she said.’

Just like the previous 49 plays, the yet to be outdoored work of art promises to be thrilling.

It tells the story of two married couples; each drowning in their own issues, while discovering that the survival of their marriages depend on their reaching out to each other.

But unlike the Titanic which totally drowned, will their action suffice to support their love?

Come find out at the National Theatre on Saturday, 3rd September, 2022, during the debut at 4pm and 8pm respectively.

Since Oliver Twist asked for more, on September 10th and 11th, “He Said; She Said” will show at the National Theatre again.

Grab a ticket, which goes for GH100, at any of the outlets: Joy FM front desk, Shell shops at Airport, East Legon, Tema Community 11, Dansoman; Total shops at Baatsonaa and Haatso; and Frankies at Osu.

At the comfort of your home, get a ticket via shortcode *365*535# and follow the instructions.