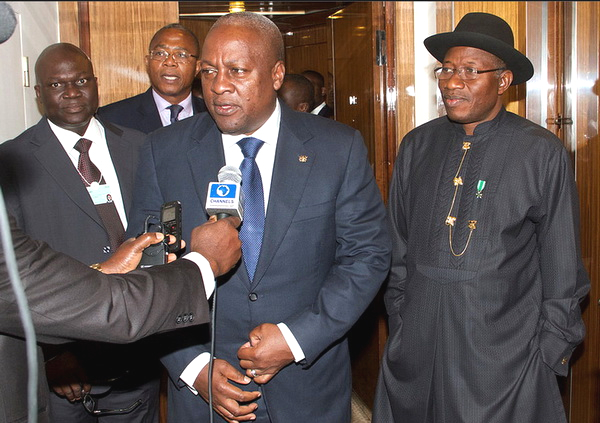 ECOWAS member countries are to summon their intelligence chiefs to Accra next week to discuss strategies to deal with Boko Haram’s threat in Nigeria and the sub-region.

The militant Islamist group’s abduction of over 200 girls last month and attacks this week which left more than 300 people dead have focused the world’s attention on Nigeria’s fight against the group.

ECOWAS Chair, President Mahama and Nigerian President Goodluck Jonathan after a meeting this afternoon, resolved to eliminate the threat posed by Boko Haram.

“We are looking to call a meeting of our joint intelligence chiefs in Accra next week, and we are inviting Cameroun and Chad to join so that together we can see how we eliminate this security threat to the sub-region.”

President expressed the solidarity of other heads of state to the Nigerian President, Goodluck Jonathan, and assured Nigerians that terrorism is everybody's concern, pledging the support of the sub-region to counter the terrorist attacks there.

President Goodluck Jonathan, who has been under fire for his handling of the mass abduction has accepted U.S., British and Chinese offers of assistance to find the schoolgirls.

Goodluck Jonathan said Boko Haram's mass abduction would mark a turning point in the battle against the Islamists, as world powers join the search to rescue the hostages.

Speaking to the BBC’s Peter Burdon, he was optimistic the girls would be rescued, adding that terrorism would not stop the world, Africa, and Nigeria from moving.

“I believe with the assistance, and investment we are making now we will be able to bring terror to an end in Nigeria.”

President Jonathan appealed to parents of the kidnapped girls to cooperate with government in finding the girls.

Currently Nigerians and the entire world is shocked and still struggling to come to terms with events in Nigeria.

Former UN Secretary General, Kofi Annan has lashed out at the Nigerian government, the African Union and ECOWAS, for doing little to solve the crisis.

He told CNN’s Christina Amanpour the Nigerian government must consider a military option.