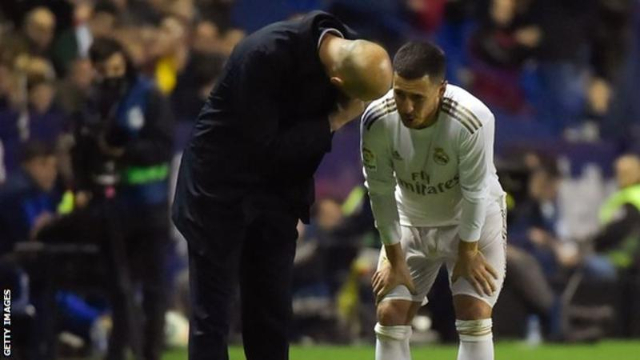 Hazard, 29, who joined Real from Chelsea in June in an initial deal worth £89m, suffered a fractured ankle during his side’s 1-0 La Liga loss to Levante on Saturday.

The Belgian was only playing his second game back after a similar injury.

“I don’t know if he will need an operation, it’s not my area. I can see he’s not happy.

“It’s important he stays positive but of course it’s difficult. It’s a bad moment, it won’t be easy and he will feel like this for a while.”

Real, who play at home in the first leg of their last-16 Champions League tie against Manchester City on Wednesday, are second in La Liga, two points behind leaders Barcelona.

Before moving to Spain, Hazard spent seven years at Chelsea, helping them win the Premier League twice, the Europa League on two occasions and the League Cup once.

However, after joining Real, he sustained a thigh injury in training the day before the start of the Spanish season and did not play until September.

He then sustained his first ankle fracture during the 2-2 Champions League draw against Paris St-Germain in November and was out for more than two months.

Hazard has helped Belgium reach the top of Fifa’s world rankings and they are one of the favourites to win Euro 2020, which begins on 12 June.