The office of Egypt’s last major independent media outlet has been raided by plainclothes security officers, its editors say.

Despite being blocked in Egypt since 2017, the website is accessible in the country via virtual private networks.

The authorities have not commented. There has been a crackdown on dissent and free speech under President Sisi.

According to Mada Masr, nine plainclothes security forces entered the office on Sunday afternoon and refused to answer questions about their identity.

For three hours, they questioned several staff members, including editor in chief Lina Attallah and managing editor Mohamed Hamama, who were later taken to a police station with reporter Rana Mamdouh.

Two France 24 journalists who were there to interview Attallah were also prevented from leaving the building. “We asked why we were detained but no-one answered,” Eric de Lavarene, one of the reporters, told AFP news agency.

He said he had time to alert the French embassy of his arrest, and representatives were sent to the office. 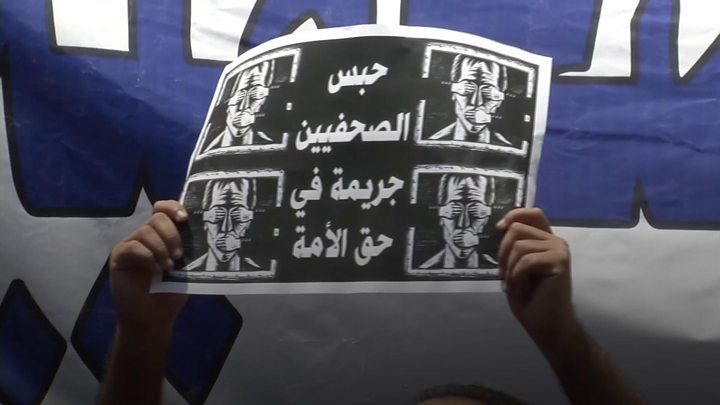 Media captionAre journalists in Egypt under attack by new law?

Also on Sunday, Mada Masr reported that its journalist Shady Zalat was released, a day after his detention in Cairo.

Egypt jails more journalists than any other country after China and Turkey, according to the New York-based watchdog Committee to Protect Journalists.

At least eight have been arrested since rare anti-government protests erupted in September, the CPJ said.

Meanwhile, Reporters Without Borders said Egypt was “one of the world’s biggest prisons for journalists.”