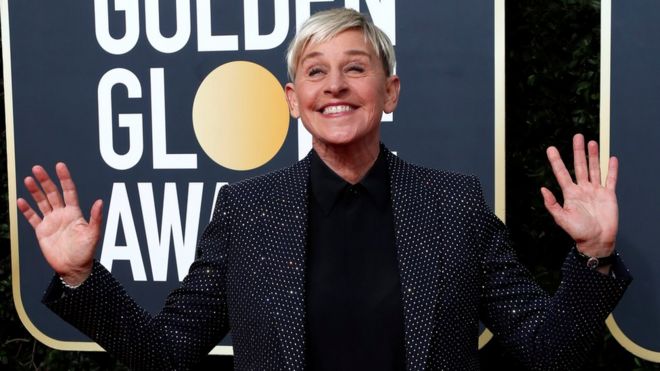 Ellen DeGeneres has admitted things happened on the set of her show “that never should have” in a video monologue launching her latest series.

In the clip, the star also said that being known as the “be kind lady” sometimes puts her in a “tricky position”.

One of the most high-profile figures on US TV, DeGeneres’s talk show has been blighted by allegations of a toxic work environment in the last few months, with three top producers leaving in August.

The star previously apologised to staff after an internal review found “deficiencies related to the show’s day-to-day management”, but has now spoken out about the allegations publicly.

Addressing a virtual audience in her first monologue of the new series of The Ellen DeGeneres Show, the presenter said: “I learned that things happened here that never should have happened.

“I take that very seriously and I want to say I am so sorry to the people that were affected.

“I know that I’m in a position of privilege and power, and I realise that with that comes responsibility. I take responsibility for what happens at my show.”

DeGeneres, who is known for encouraging viewers to “be kind”, also addressed reports that she is different to the person people see on screen.

She recalled that she started saying “be kind to one another” at the end of each show after the suicide of a young man named Tyler Clementi, who was bullied for being gay.

“Being known as the ‘be kind lady’ is a tricky position to be in,” she said, and described herself as a “work in progress”.

“I am that person that you see on TV,” the star said. “I am also a lot of other things.”

She continued: “Sometimes I get sad. I get mad. I get anxious. I get frustrated. I get impatient. And I am working on all of that.”

“We have had a lot of conversations over the last few weeks about the show, our workplace and what we want for the future, we have made the necessary changes and today we are starting a new chapter.”

It comes after a Buzzfeed News investigation made a series of claims about the alleged toxic culture on the daytime talk show, which has been on air since 2003.

Following the reports, there were calls for the star to stand down from the series.

Her wife, Portia de Rossi, spoke out in support of the presenter, posting on Instagram to say “I stand by Ellen”, while other stars, including singer Katy Perry, also backed her on social media.

In her monologue, DeGeneres added: “My intention is always to be the best person I can be and if I’ve ever let someone down if I’ve ever hurt their feelings, I am so sorry for that.”

DISCLAIMER: The Views, Comments, Opinions, Contributions and Statements made by Readers and Contributors on this platform do not necessarily represent the views or policy of Multimedia Group Limited.
Tags:
Ellen DeGeneres