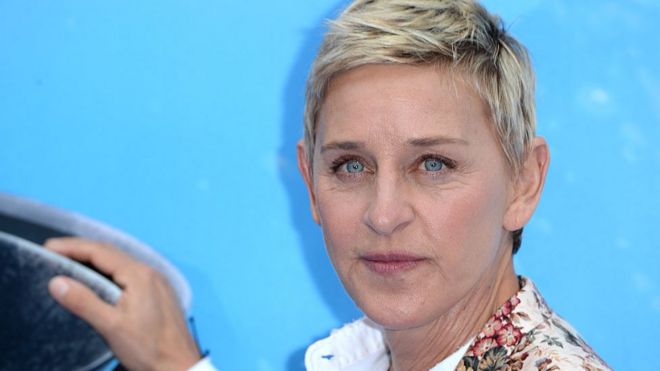 Several staff will be replaced on Ellen DeGeneres’ daytime chat show after an investigation uncovered “deficiencies” in “the show’s day-to-day management”.

The inquiry was prompted by a widely-circulated story on Buzzfeed news, in which employees made allegations of racism and intimidation on the show.

The accusers claimed the workplace was toxic and “dominated by fear”.

In an email to staff, Ellen apologised and said she was “committed to ensuring this does not happen again”.

“We all have to be more mindful about the way our words and actions affect others, and I’m glad the issues at our show were brought to my attention,” she added.

Production company WarnerMedia said “several staffing changes” would take place as a result of its investigation.

What were the accusations against Ellen’s show?

Several current and former staff members told Buzzfeed they had been fired after taking medical leave or bereavement days to attend family funerals. Others said they were also instructed not to speak to DeGeneres if they saw her around the office.

One employee said she experienced racist comments, actions, and “microaggressions” during her 18 months on the show, and was reprimanded for raising concerns about her treatment.

The criticisms were in stark contrast to the public image of DeGeneres and her show. The comedian, whose mantra is “be kind to one another”, has previously described her programme as “a place of happiness”.

“That ‘be kind’ [stuff] only happens when the cameras are on. It’s all for show,” one former employee told Buzzfeed. “I know they give money to people and help them out, but it’s for show.”

The accusations led to an internal inquiry by production company WarnerMedia, who interviewed dozens of employees about the atmosphere on the show.

How has Ellen responded?

The star, who has presented the show for 17 years, did not initially respond to the accusations, waiting until WarnerMedia’s investigation had taken place before making a statement.

In her email to staff, she said steps would be taken to “correct the issues” that had come to light.

“On day one of our show, I told everyone in our first meeting that The Ellen DeGeneres Show would be a place of happiness – no one would ever raise their voice, and everyone would be treated with respect,” she wrote.

“Obviously, something changed, and I am disappointed to learn that this has not been the case.

“And for that, I am sorry. Anyone who knows me knows it’s the opposite of what I believe and what I hoped for our show.”

However, she distanced herself from the accusations, saying that “people who work with me and for me are speaking on my behalf and misrepresenting who I am, and that has to stop”.

The email, which was published in full by The Hollywood Reporter, also referred to the public fallout DeGeneres endured after coming out as gay in the 1990s.

“As someone who was judged and nearly lost everything for just being who I am, I truly understand and have deep compassion for those being looked at differently, or treated unfairly, not equal, or – worse – disregarded. To think that any one of you felt that way is awful to me.”

“I am so proud of the work we do and the fun and joy we all help put out in the world. I want everyone at home to love our show and I want everyone who makes it to love working on it. Again, I’m so sorry to anyone who didn’t have that experience.”

What did the investigation find?

WarnerMedia said it took the recent allegations “very seriously” and interviewed dozens of current and former employees about the work environment.

“Though not all of the allegations were corroborated, we are disappointed that the primary findings of the investigation indicated some deficiencies related to the show’s day-to-day management,” said the company in a statement.

“We have identified several staffing changes, along with appropriate measures to address the issues that have been raised, and are taking the first steps to implement them.

“Warner Bros. and Ellen DeGeneres are all committed to ensuring a workplace based on respect and inclusion. We are confident this course of action will lead us to the right way forward for the show.”

Have there been more revelations?

Among the accusations were that head writer and executive producer Kevin Leman made a number of inappropriate sexual comments about junior employees in the workplace.

Leman issued a statement after the Buzzfeed article was published to categorically deny “any kind of sexual impropriety”.

“I started at The Ellen Show as a PA more than 17 years ago and have devoted my career to work my way to the position I now hold,” he said.

“While my job as head writer is to come up with jokes – and, during that process, we can occasionally push the envelope – I’m horrified that some of my attempts at humour may have caused offence.”

“I have always aimed to treat everyone on the staff with kindness, inclusivity and respect. In my whole time on the show, to my knowledge, I’ve never had a single HR or inter-personal complaint made about me, and I am devastated beyond belief that this kind of malicious and misleading article could be published.”