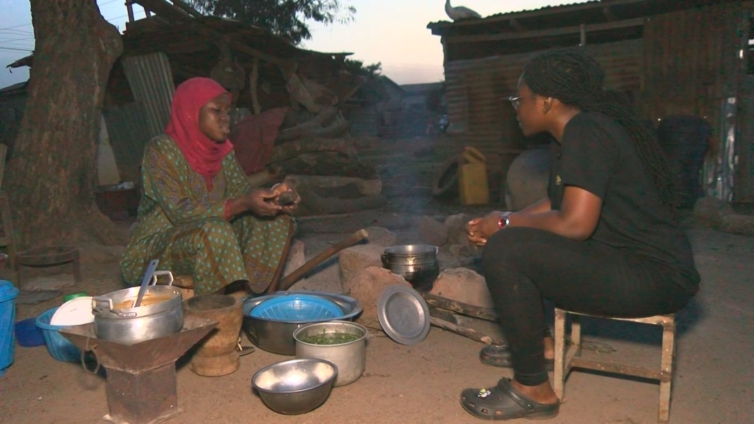 The human food cycle ends on the plate of the consumer, yet cooking or related topics are not priotised in agricultural conversations. Cooking is part of life. It is an activity that brings families together and has cultural and social significance around the world. But in some developing countries like Ghana, solid fuels like wood and coal are often used in traditional stoves for cooking.

Rahma Abdul Karim is a 23-year-old lady whose only source of cooking energy is firewood. Although she’s scared of the health implications, she said there’s no option as her family is barely surviving the economic crisis.

“Since birth, I have seen my parents using the hearth so I’m also continuing with it. It scares me but I have nothing to do than to use it. My major problem with using firewood is the cost. Every day, I buy ¢5. I use charcoal sometimes but one scoop of charcoal finishes in preparing one meal but with firewood. I am able to use it again to heat water for us to bath the following day,” she said.

Rahma says it takes her close to three hours to prepare a meal. In the unlucky situation of rain, it takes her extra 30 minutes to set fire before cooking.

Rahma opts for firewood because she said charcoal is expensive whereas Joycelyn Ntim Donkoh prefers charcoal, according to her, it is economical compared to using liquefied petroleum gas. Joycelyn uses “jikokoa”, a type of coal pot that emits less smoke.

“I actually don’t use any means of cooking than this. With a handful, of charcoal the fire is set already. In Ghana, I think this is more economical, LPG is so expensive. So, when I get GHc2 or GHc3 charcoal, I can use it two or three times,” Joycelyn highlighted.

Joycelyn is a beneficiary of Clean Cooking Alliance, a non-profit organisation aimed at building a sustainable clean cooking industry across the globe. Rocky Dawuni is an advocate with the alliance championing the course.

“Over the years, there has been research that when the stoves are not efficient enough and when sometimes you burn some of this firewood, what happens is that there’s a lot of smoke that comes out. The smoke has health implications not only on the women who are usually cooking in the kitchen but also all the people who are around the household,” Rocky intimated.

He further stated that “this hazard has also contributed to a large number of people who have developed certain illnesses or has been the inception point of certain illness. So, the idea of creating the more efficient way of cooking that can use cleaner fuels and also reduce the emissions has been something that has been on the minds of a lot of policy makers around the world so the concept of clean cooking came forth out of that.”

“We do a lot of advocacy and research. The alliance is actually made up of manufacturers of stove technologies, fuel, retailers, distributors, individuals, research development and NGOs among others. Presently with support from GNI and the World Bank, we’re working in the Ellembelle district where we are distributing about 1500 cleaner fuels and stoves to households.

Rahma made an appeal for a change in the type of cooking energy she uses.

“Sometimes the smoke enters my eyes and tears will be flowing so I need help,” she said

DISCLAIMER: The Views, Comments, Opinions, Contributions and Statements made by Readers and Contributors on this platform do not necessarily represent the views or policy of Multimedia Group Limited.
Tags:
Clean Cooking Alliance
Energy transition