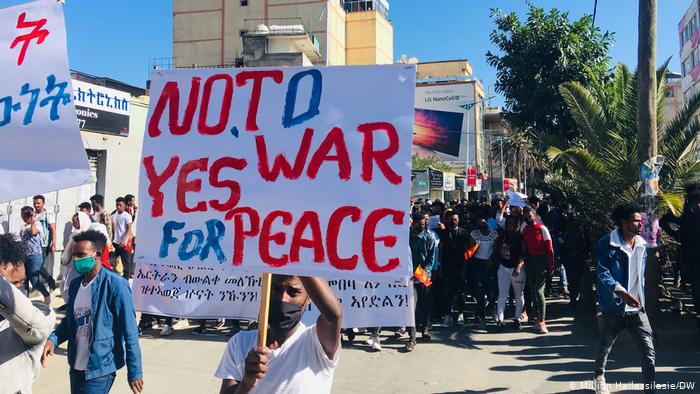 African leaders are trying to alleviate tensions in Tigray as Ethiopia said it had seized another town. But Addis Ababa said mediation was a long way off and denied suggestions it had targeted civilian locations.

Leaders from across Africa attempted Monday to initiate some form of reconciliation in Ethiopia’s escalating internal conflict, two days after rocket strikes on Eritrea’s capital.

Ugandan President Yoweri Museveni held talks with Ethiopia’s Deputy Prime Minister Demeke Mekonnen in Gula, Northern Uganda. He said discussions “focused on the peace and security issues affecting Ethiopia currently. Being one of the oldest countries that was not colonized in Africa, Ethiopia is the pride of the continent.”

Before setting out for my campaign meeting this morning, I held discussions with the Ethiopian Deputy Prime Minister, H.E. Demeke Mekonnen Hassen and his delegation at Gulu State Lodge. pic.twitter.com/q4LmCZX9Ep

Former Nigerian President Olusegun Obasanjo on Monday left for the Ethiopian capital of Addis Ababa to mediate in the crisis, his spokesman said.

However, Ethiopian Prime Minister Abiy Ahmed’s office and the African Union said they had not received any information about Obasanjo’s visit.

What is the background to the conflict?

Abiy declared on November 4 he had ordered military operations in its Northern Tigray region in a dramatic escalation of a long-running feud with the local ruling party, the Tigray People’s Liberation Front (TPLF).

On Monday, Ethiopia said it had captured another town. Defense Minister Dr Kenna Yadeta told DW: “All their [TPLF’s] actions testify to their high level of frustration. They have no more strength, capability and time to intensify wars in the region.”

He also accused the TPLF of giving out misinformation. “They claimed to have shot down air force jets, and to have won over about ten thousand government forces. It turned out a lie, as they were known to lie during their rule over the past 27 years.”

“We [the Government of Ethiopia] can achieve a crushing victory any day from now,” he concluded.

Meanwhile, TPLF leader Debretsion Gebremichael called on the United Nations and African Union to condemn Ethiopia’s troops, accusing them of using of high-tech weaponry, such as drones, to carry out attacks.

Hundreds of people are reported to have been killed so far in the conflict, some in atrocities as documented last week by Amnesty International.

More than 25,000 Ethiopians have fled into neighboring Sudan as a result of the conflict, according to Sudanese officials.

The conflict could jeopardize the recent opening up of Ethiopia’s economy, antagonize ethnic tensions elsewhere, and tarnish the reputation of Prime Minister Abiy who only last year won a Nobel Peace Prize for a peace pact with Eritrea.