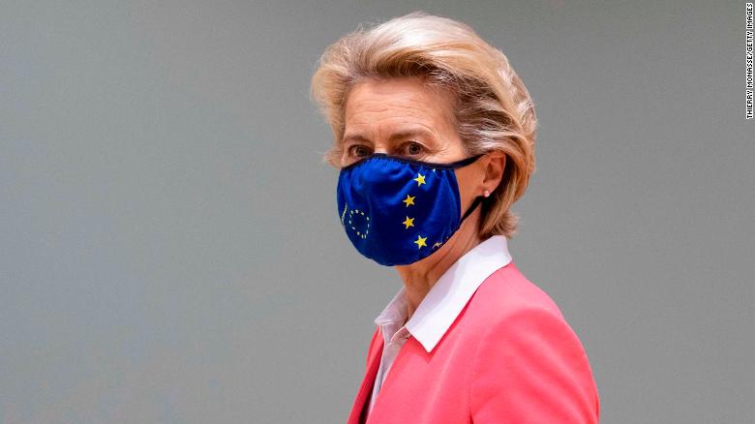 BRUSSELS, BELGIUM - OCTOBER 2: President of the European Commission Ursula von der Leyen arrives for the second day of an EU Chief of State Summit in the Justus Lipsius building, the EU Council headquarter on October 2, 2020, in Brussels, Belgium. (Photo by Thierry Monasse/Getty Images)

European Commission President Ursula von der Leyen is self-isolating after participating in a meeting that was attended by a person who subsequently tested positive for Covid-19, she announced on Twitter.

Von der Leyen said she tested negative for the virus last week and will be tested again on Monday.

“I’ve been informed that I participated in a meeting last Tuesday attended by a person who yesterday tested positive for COVID-19. In accordance with regulations in force, I’m therefore self-isolating until tomorrow morning. I’ve tested negative on Thursday & am tested again today,” she wrote on Monday.

Von der Leyen’s announcement comes as coronavirus cases are on the rise in Europe, with new restrictions and local lockdowns imposed in countries across the continent.

In the Czech Republic, a state of emergency has been introduced for 30 days to help to curb the accelerating growth of new Covid-19 cases and to relieve the pressure on the health care system in the country, as a total of 1,841 new cases were recorded by the Ministry of Health on Sunday.

In France, Prime Minister Jean Castex confirmed the Greater Paris area is to be be classified as a “maximum alert” zone, with measures in effect from Tuesday, following a rise in the number of coronavirus cases. A press release from the Prime Minister’s office says the zone has crossed the three thresholds that would put it in such an alert category: disease incidence rate, incidence rate for the elderly and occupancy rate of resuscitation beds by Covid-19 patients.

Meanwhile, the number of reported coronavirus infections in the United Kingdom jumped on Sunday to a new daily record of 22,961, nearly double the previous record for a single day, as it emerged that thousands of infections were not included in previously published daily figures, according to Public Health England.

Poland reported 2,367 new Covid-19 cases on Saturday, hitting a record high for the third day in a row, according to a series of tweets by the country’s health ministry, while Italy reported its highest daily increase since April 24, with 2,844 new coronavirus cases on Saturday.

DISCLAIMER: The Views, Comments, Opinions, Contributions and Statements made by Readers and Contributors on this platform do not necessarily represent the views or policy of Multimedia Group Limited.
Tags:
coronavirus pandemic
European Union Commission
Ursula von der Leyen