Why vaccinated athletes are testing positive for coronavirus 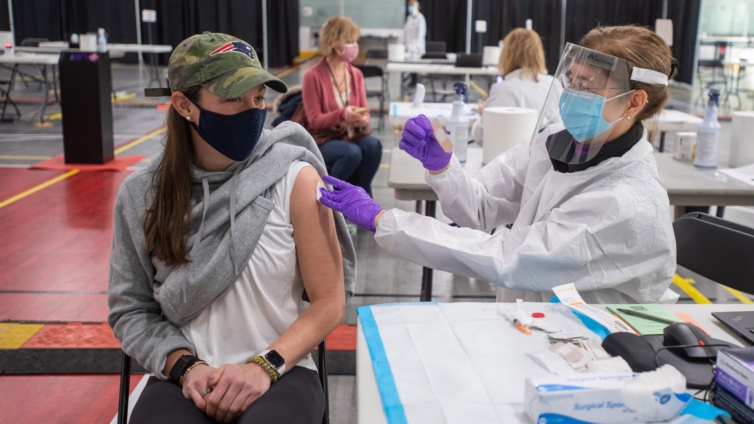 A star NBA player, the U.S. Open golf champion and a Ugandan Olympic coach have something in common that is creating a new headache for sports organizers: they tested positive for the novel coronavirus after being vaccinated.

Throughout the pandemic, athletes have been the most tested population on the planet, sometimes providing vivid examples of emerging theories—and sometimes helping prove them.

Now these athletes are showing that while vaccines are exceptionally effective in preventing death and severe illness from the coronavirus and its known variants, some are far from foolproof in preventing infection altogether.

Most of the athletes with so-called “breakthrough” infections are asymptomatic. The infections wouldn’t have been noticed except for the fact that people who work in sports are among the last being tested intensely for the virus.

These surprising positive tests are a problem for the hosts of large events. In the case of the Olympics, they could trigger an outbreak in the surrounding Japanese population or beyond, to any of the 200 participating nations—in addition to creating chaos in competitions.

The positive tests also complicate the argument made to athletes that vaccination will spare them from a positive test that bars them from competition. Now sports leaders have to contend with questions such as: Are people who are vaccinated but testing positive for the virus contagious? What does this mean for their close contacts? Who, if anyone, should be removed from the biggest event of their lives?

Vaccinated people who have turned up positive for the virus include an unnamed American track and field athlete, another person attending the U.S. Olympic team trials in Eugene, Ore., and two members of the Ugandan Olympic delegation traveling to Tokyo for a pre-Games training camp.Breakthrough infections are believed to be rare, though exactly how rare is unclear. That’s in large part because most asymptomatic cases would only be detected by the kind of frequent testing that is rarely deployed outside of settings such as sports.

It’s not known how many elite athletes have been vaccinated, because organizations haven’t mandated it and in many cases say they aren’t collecting the data. However, many athletes have indicated they are vaccinated, and positive tests are reported far less frequently this year than they were last year.

Breakthrough infections also hit the New York Yankees, professional golfer Jon Rahm and NBA star Chris Paul. In May, at least nine Yankees—spanning players, coaches and staff members—tested positive for the virus. All had been vaccinated in March or April with the single-dose Johnson & Johnson vaccine, which has been found to be 66.1% effective at protecting people from developing moderate and severe cases of Covid-19 at least 28 days after vaccination.

Rahm, the golfer, got the Johnson & Johnson vaccine in the days leading up to the Memorial Tournament. As he played his third round, a test he had taken after his second round came back positive. Rahm found out at the end of his round from the PGA Tour’s medical adviser, on national television—yanking away a near-sure win in the tournament, and a payday of nearly $1.7 million. Two weeks later, however, he was testing negative and won the U.S. Open.

The single-dose regimen has been popular among some athletes because it’s one and done, and easier to schedule and plan around potential side effects that could hamper performance at just the wrong moment.

Two-dose regimens generally have higher efficacy rates. The two-dose vaccine from Pfizer and BioNTech has been found 95% effective at preventing Covid-19 with symptoms. In a large clinical trial for Moderna, the other authorized vaccine in the U.S., the vaccine was shown to be 94.1% effective at preventing Covid-19 cases with certain symptoms, including severe cases. The Centers for Disease Control has said that the Pfizer and Moderna vaccines are 90% effective at reducing the risk of infection two weeks after a second dose.

There have been at least two prominent, apparent breakthrough cases in the NBA. The most recent involves Paul, the Phoenix Suns’ star and the president of the National Basketball Players Association, who missed the first games of the Western Conference Finals while sidelined by the league’s health and safety protocols. Paul tested positive despite being fully vaccinated and remained asymptomatic, according to multiple reports.

There have been two positive tests among Uganda’s Olympic delegation, detected during mandatory testing upon arrival in Tokyo for a pre-Olympic training camp. In that group both members—and the seven other members of the team on the trip—had received two doses of the AstraZeneca vaccine, the Ugandan Olympic Committee said.

The first person to test positive, a coach, was immediately put into the care of Japanese officials and was asymptomatic and “doing fine,” the Ugandan committee said. AstraZeneca has released data showing that it is 76% effective at preventing Covid-19 with symptoms.

The Ugandan committee didn’t respond to additional inquiries about how recently the final dose had been administered.

Timing may be an additional factor. People are often considered fully vaccinated at least two weeks after their final dose. But in some countries, vaccines are just becoming available to Olympic-bound athletes now.

Athletes also have to weigh the scheduling of those vaccines around critical training moments or Olympic selection opportunities — which are also in full swing at this moment. After shots in a two-dose regimen were secured for Australian athletes, the country’s divers took care to get their first doses several weeks before trials, to avoid side effects. They held off getting second doses until early June, after the team had been picked.

But attempts to time the vaccine can be tricky. The Philippines gymnastics federation started scrambling in early June to get a vaccine for Carlos Yulo, a gold-medal contender on the floor exercise. Initially, Philippines gymnastics federation president Cynthia Carrion-Norton said, she did not want him vaccinated “as I know he is in perfect health, and did not want any medicine or vaccine to enter his body and cause any problems.”

Carrion-Norton said she reconsidered after talking with his coach. “He said the athletes will be tested for Covid daily and by any chance he gets a positive result he will not be able to compete after all the training he went through.”

Then there was a new problem. While other Filipino athletes were vaccinated en masse at home, Yulo trains in Japan. Getting a shot for him there has involved bringing in the Philippines embassy and several other top officials. As of late June—less than one month from the opening of the Olympic Games—they had not been successful in procuring a vaccine for Yulo, Carrion-Norton said.

DISCLAIMER: The Views, Comments, Opinions, Contributions and Statements made by Readers and Contributors on this platform do not necessarily represent the views or policy of Multimedia Group Limited.
Tags:
coronavirus pandemic
Olympics 2020