Euros On MGL: Belgium set up Italy quarter-final after edging past Portugal 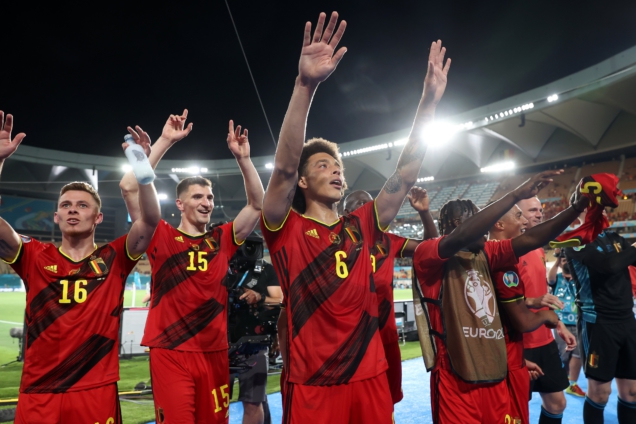 A moment of class from Thorgan Hazard proved enough to knock out holders Portugal as Belgium continued their pursuit of a first major title by reaching the quarter-finals of Euro 2020.

The Borussia Dortmund winger’s swerving drive from 25 yards arrived late in a cagey first-half and carried Roberto Martinez’s side into a mouth-watering meeting with Italy on Friday.

Portugal – who again only introduced Manchester United’s Bruno Fernandes from the bench – will look back on key Diogo Jota chances, a Ruben Dias header that was saved and a late Raphael Guerreiro drive that struck the post.

Kevin De Bruyne’s fitness may dominate headlines in the build-up to the Italy showdown in Munich after he limped off moments after half-time, and Belgium also lost Eden Hazard to a complaint late on.

The world’s highest-ranked side may have key holes to fill but again they have showed they possess the grit to complement their undoubted quality.

Martinez punched the air and shouted “yes” on the sound of the final whistle while Ronaldo crouched and beat the turf in frustration at Seville’s Estadio de La Cartuja.

His side had perhaps shown their best football of the tournament in the second 45 minutes, amassing 15 of a lofty 23 shots on the night.

Jota fired a snap-shot over, Dias warmed the hands of Belgian keeper Thibaut Courtois with a point-blank header, Guerreiro found the foot of the post and substitute Joao Felix dragged a late effort wide.

Manager Fernando Santos may well be asked where such a second-half display has been hiding.

On their route to the trophy in 2016 Portugal won just one tournament fixture inside 90 minutes and in reaching the last-16 stage this time around they had failed to inspire.

That they seemed so reluctant to use their unquestionable quality to dominate games is puzzling and whether Ronaldo – now 36 – graces another major tournament will now likely become a focus.

He will undoubtedly go on to move clear of former Iran striker Ali Daei given the pair currently share the record figure of 109 international goals.

His frustration at the final whistle though was tangible as after the highs of securing a first major honour in 2016, Portugal have flattered to deceive this time around.

Lukaku tamed but Belgium dig in

Martinez is now three wins away from delivering a first major honour for Belgium.

He duly concluded this win required his side to overcome the fact Portugal’s best trait is “doing exactly what they need to do in the game to win”.

And so it played out, with Belgium – now only beaten once in 27 outings – doing just enough to see off a side who have themselves achieved success by doing just enough. Martinez will be emboldened by the fact his group looked like a side who knew how to get over the line.

Jan Vertonghen and Toby Alderweireld – boasting more than 240 caps between them – were recalled, while the likes of Axel Witsel, Eden Hazard, Romelu Lukaku and Dries Mertens – all past or close to 100 caps – simply underline the experience Martinez has to call upon.

Talisman Lukaku was quiet, touching the ball just 30 times. Only Portugal’s Bernardo Silva – who played just 56 minutes – saw less of the ball of all the outfield players to start.

And Lukaku’s lack of impact showed as Belgium served up just six shots on goal all night. Thorgan Hazard’s effort – which curled away from Rui Patricio – was their standout moment and they appeared happy to contain Portugal rather than press for more.

De Bruyne was hacked down before the break and lasted just seconds of the second half, while Eden Hazard pulled up sharply moments from the finish.

Both would be a colossal miss against Italy, the only side who – like Belgium – won all of their group games and remain in the tournament.

Many have tipped Roberto Mancini’s side to go all the way given their impressive displays so far.

Belgium may not have hit such entertaining heights here but there can be no doubt they pack enough of a threat to undo such opposition.

To knock out the four-time world champions and European champions of 1968 will go a long way to bolster hope that this might finally be Belgium’s year.