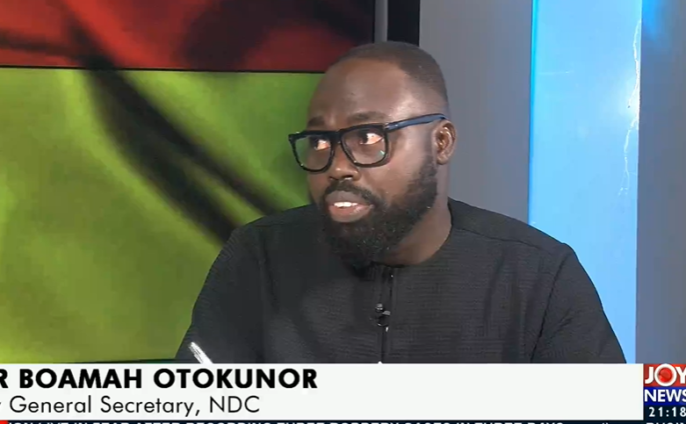 Deputy General Secretary of the opposition National Democratic Congress (NDC), Peter Boamah Otokunor says after a critical study of the European Union’s Election Observation Mission Report (EU EOM), it can be said that Ghana’s true state has not been captured.

Mr Otokunor explained that this is due to several irregularities and flaws identified in the report.

According to him, the EU EOM report which was prepared without political parties never discussed with the Inter-Party Advisory Committee (IPAC) and went to Parliament on the blind side of all political parties.

In his view, this can not be taken lightly because this report is not a true representation of Ghana’s election process yet plays a crucial role in the international space and can make and unmake the reputation of Ghana.

“They failed to accurately report and discuss all the issues and all the steps…If you look at the procedure, they actually went through the back door even in Parliament and that is where they encountered several problems and they had to go back and forth three times before the instrument was properly laid. So that problem itself was something that was supposed to be reported by the EU.

His comment comes after the European Union Election Observation Mission to Ghana 2020 released a press statement that talked about the final report on the December presidential and parliamentary elections.

According to the conclusion of the report, the 2020 election in Ghana was efficiently organised, competitive, saw voters participating freely in large numbers, and successfully met a range of international standards.

The report also included recommendations and proposals for consideration by the Ghanaian people and aimed at improving future electoral processes and strengthening Ghana’s democracy.

But giving more prominence to his assertion, Mr. Otokunor stressed that the EU EOM also failed to put in their report that some great number of eligible Ghanaians were prevented from partaking in the voting exercise.

“…You cannot make that conclusion, you would have to put all the bits and pieces together as part of the process then you can make a conclusive statement on whether it was free and fair.

“We expected that the EU will report on some of these critical issues because you are doing comprehensive monitoring of the elections, so all the fallouts during the registration exercise; the stabbing of Silas Wulochamey in Banda, the shooting at Dormaa Central.

“These cannot be isolated, if this thing happened in any of the European Countries, it is a big deal, why is it an isolated situation in Ghana?”

In an interview with host of PM Express Evans Mensah. the Deputy General Secretary said he found it incomprehensible that after studying the document over and over again, there is no aspect of the report that talks about security, since that is one of the many metrics one can use to measure how free or fair an election really is.

“There is no aspect of this report that talks about security, recommendations that have been made, nothing said on security, I think that is a very big flaw in the monitoring tools that was used by the EU…these are the things they have to look for.

“Because if you come and monitor all the processes…why didn’t you include security?, why were you not monitoring security?” he quizzed.

According to Mr Otokunor, the work of the EU could be an objective one, with all the right intentions but based of their “defective tools” and metrics used to arrive at a conclusion, their work does not “look or sound or appear independent and fair — and I think that is problematic.”