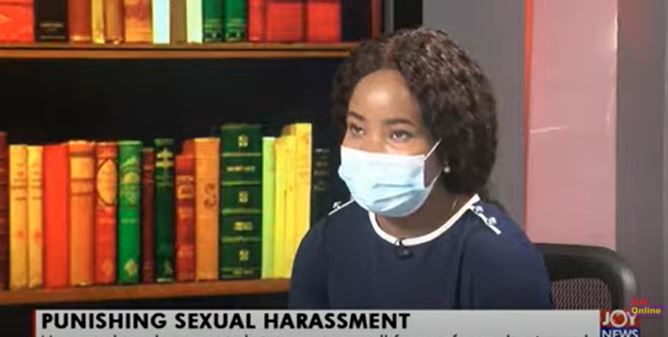 A Board Member of FIDA, Kezia Kenneth Azumah has entreated all organisations within the country to formulate a workplace policy that addresses harassment and sexual harassment in the office.

According to her, this would provide an official framework for organisations to appropriately address issues of harassment in their workplaces to prevent the occurrence of major scandals.

She added that it would afford victims of harassment an opportunity to report such incidents for redress.

Speaking on JoyNews’ The Law, Sunday, August 22, Kezia Azumah said, “Every organization should have a policy on harassment and sexual harassment at hand so that when we all know what is in the policy, we all follow.”

She stated that to avoid being accused of harassing colleagues, workers interested in romantically pursuing their workmates should do that outside of office hours.

“In fact, if you want to chase a girl, chase her after office hours because under those conventions that would be ratified very soon by Ghana, you would not go to chase her in the office setting, or in the school setting.

“When you do that there and the person reports you, you’ll be caught under the law,” she explained.

Kezia Azumah listed some acts of harassment as, “If you walk around invading the privacy of the person, making suggestions to her, demanding dates, propositioning sexual intimacy, threatening them, suggesting things about their body, and then bragging about sexual prowess;

“Talking about their mannerism using derogatory language on them, talking down on people, unnecessary physical contact – the person does not want a hug you went to hug them – invading their privacy – they’re in their room, they say don’t come there you have come, and then demanding hugs, soliciting sexual favours, all kinds of things.”

The Director of FIDA International, Afua Brown-Eyeson, a co-panelist on the Show pointed out that compliments are not harassment unless the said compliment is unwanted, derogatory or demeaning in nature.

She said, “We’re not saying giving compliments is harassment. I think that should come out clearly. Because everybody would like to be complimented, both males and females. But the harassment is when it is unwanted and when it is supposed to sometimes demean.”

Their comments were made in a discussion concerning the release of a video in which Anglican Priest, Reverend Father Obeng Larbi was seen kissing three female students on the lips in front of his congregation at St. Monica’s College of Education.

According to the Priest, his actions were to add ‘a human touch’ to a short appreciation ceremony organised for the students who would be going for their Macro Teaching (Off-Campus Teaching Practice) when College resumed the next academic year.

“The three students seen in the video performed extraordinarily well and were therefore called to be appreciated by the chaplain. An attempt to add a human touch resulted in the scene in the video,” he said in his apology letter.

However, reacting to the video, the duo explained that the Priest could suffer charges ranging from sexual assault, harassment, and even for breaching and aiding the students to breach the Covid-19 protocols.