Facebook’s annual developers’ event, held this year in San Jose, is the social network's chance to bring together all of the people that work with the site to create the apps and other features used by the almost two billion people.

The event is a launching pad for new features. After a busy first day, here's my pick of the most interesting and significant.

Augmented reality – that’s when digital images are placed over the real world – is the key battleground between Facebook and its bitter rival Snapchat. And AR Studio could be the differentiator.

Facebook is opening up its AR platform so developers can make use of Facebook’s immense computing power – for things like image recognition – without having to invest in the costly and complex tech themselves. AR studio is the tool they will be able to use to make the most of it.

One example showed a tie up with Manchester United in which live scores, statistics and ticker-tape was slickly added over smartphone footage of fans celebrating in a bar. Little practical use, maybe, but it sets up Facebook to be the home of the best augmented reality apps, accelerating at a pace Snapchat really can’t match, if you ask me.

Here’s the thing: I really don’t like Facebook Messenger. It’s an app I’d never want to use were it not attached to Facebook, which makes it kind-of unavoidable if I want to reach my friends. That said, I know many friends who have resisted adding it to their phones.

Disturbingly, David Marcus, the head of Messenger, wants to bloat this app even further by adding in a host of new integrations, many designed to help you interact even more with businesses.

But I understand why. The model here is WeChat, the gigantic Chinese app that lets users do a bunch of things from within the same app. Facebook wants you use Messenger to chat to some friends about a night out and, without leaving Messenger, buy some gig tickets, make dinner reservations and book a ride-share. 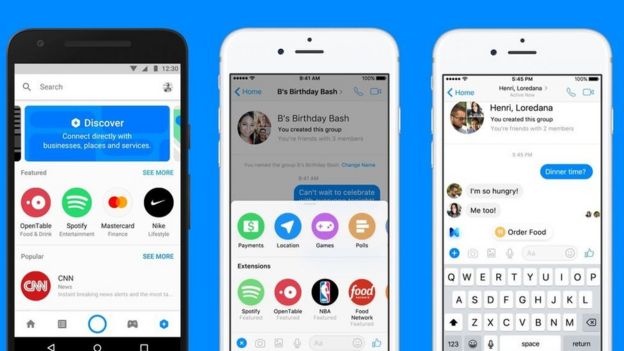 For just idle chit-chat, Messenger is also being upgraded. Mr Marcus showed off a Spotify integration, where you can drop songs into group chat and all listen at once. Neat.

Mr Marcus admitted the excitement last year around bots (some of it from yours truly, I’ll admit) never lived up to the hype. There are 100,000 bots on Messenger already, and so far none of them have been much cop (except this one from a 14-year-old boy).

But the Messenger boss is confident he’s got the technology headed in the right direction. To me, it seems the “chat” is evolving from trying to sound human, to just conceding that swift multiple choice is much more useful to all (not to mention easier to code).

3) Hanging out with friends in VR

Facebook’s decision to buy Oculus VR was motivated by the possibility that the technology would become a social platform, and not just about gaming.

Facebook Spaces is the first true embodiment of that. It places you, virtually, as a cartoony avatar, in a world inhabited by your other friends – also avatars. Here you can lark about, play games, share photos, take a “selfie”, even do a video call with someone in the “real” world.

It’s a bit of silly fun. And I can already hear many of you reading this and saying “How sad! Be friends in the real world!”. But hey, not everyone’s friends are in visiting distance. And this is like a good Skype chat, and then some. 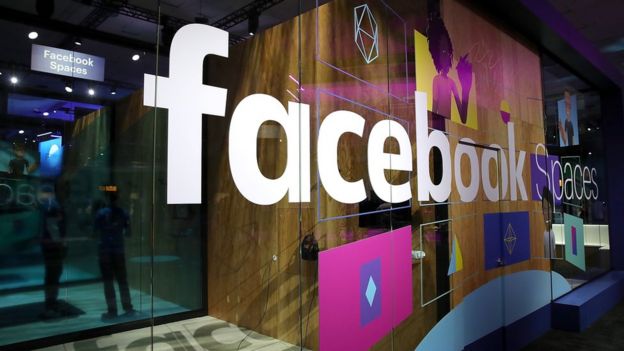 The barrier to entry, though, is still cost. To get this experience you need the Oculus Rift, which, if you don’t already have a powerful-enough PC to hand, costs upwards of $1,000 to get going.

Which is why Facebook is working hard to make its PC-free, wireless, high-quality headset. Mark Zuckerberg brought that subject up again in his opening keynote, but didn’t elaborate. I’d hoped he might surprise everyone by showing it to us at the end of the keynote, but no such luck.

For Facebook Spaces to go mainstream, that headset needs to come out fast. And it needs to be less than $500. I’m not holding my breath.

This one will sound boring, so I’ve left it until last.

Facebook announced that there would be a free version of Workplace, available by the end of this year.

Workplace is Facebook’s answer to collaboration tool Slack and is, in direct contrast to Facebook itself, designed to help with productivity.

Right now, the full version of Workplace is free. But later this year that will change, with a paid-for premium version, offering better admin tools and things like cloud file storage and sharing, and a free version with just the basics.

You may groan, but say what you like about Facebook, it is easy to use. And so having the company design the tools you use every day at work will be pretty appealing for many people, I’m sure.