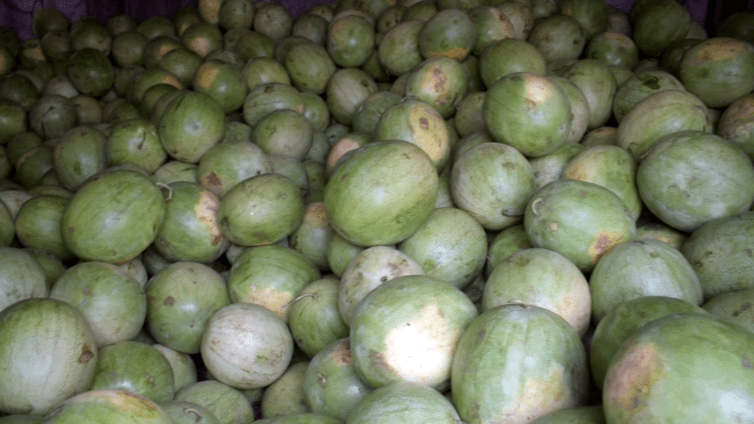 Watermelon is a popular food crop grown in Ghana. It is ranked among orange and mango as the top three fruits preferred by most Ghanaians.

Due to the high demand from consumers, melon farmers often undertake certain cropping measures to speed up the harvest time of the crop.

Yussif Bunbassowns a 10-acre watermelon farm at Atebubu, in the Ahafo Region. He attributes the tastelessness of the melon this days to the use of wrong fertilisers.

He admitted the use of fertilizers in excess or at the wrong time contributes to its lack of taste.

‘’The appropriate time to use the fertilizer is two weeks after it is planted. when the right fertilizer is not used, the melons become whitish when you cut it. The fertilizer we use on watermelons is quite expensive so most of the melon farmers tend to use the cheap ones which aren’t good for the growth of the crop.

According to him, “It’s good to apply the fertilizer when the melons are just about growing, failure to do so results in it being whitish or even spoil when transporting’’.

But this has dire implications.

A large portion of the fruit spoils before they can be eaten or processed; and wholesalers and retailers tend to suffer most from the loss.

The use of fertilizers to increase the rate of harvest of crops has become a common practice among farmers. Some crops are forced to mature before their due time.

Abena Fosua, a wholesale watermelon seller at Tech-Junction in Kumasi who on a regular day, has retailers come to her to take melons to hawk.

For sometime now, her customers often complain about how the melons taste.

Mma Ayisha, her assistant, recounts how this has affected their business.

“We can’t do anything about them when it’s  like that. It becomes a loss to us. You can’t determine whether it’s white or not until you cut it. We incurred losses from our last two trips. We had to discard most of them because they were rotten.  We give them out to people to feed their livestock when it rots,” she said.

These days, the quest for healthy-living has resulted in the demand for fruit smoothies. At tech-junction in Kumasi, a smoothies vendor, Twumasi Ankrah, observes that watermelon was one of his main sources of income until his customers started complaining of the taste.

He has stopped using melons for juice due to the loss of its sweetness.

“I don’t make juices from watermelons anymore; they are watery these days.  Initially, when I cut them, they appear dry with less water but now this is not the case.

“The watermelons are tasteless nowadays. adding sugar is not a choice because I prepare my juice with sucrose. The farmers should allow the plant to grow naturally but not rush their growth. They should desist from using the fertilizers in cultivation,” he said.

The average price of melon ranges between 2 cedis and 5 cedis at most vending points.

Mama Agnes is a retailer. She has been in the business for ten years now. Market, according to her, isn’t as good as before.

Previously, her profit will be close to the cost price of the watermelon but now, after deducting all expenses, she incurs losses.

“We are still hawking it because we have no other business to do. Government should help subsidize the cost of transporting watermelons’’ she lamented.

Faustina Frimpong used to make a profit of 50 cedis out of 50 cedis invested, but now gets less than 20 cedis as profit.

“Some customers complain about the cost, insisting the watermelons are expensive although they are ubiquitous. We now make less profit. because the melons easily get wasted lately, the retailers don’t add excesses as before. Business is bad now.

Kwaku Asare is a consumer. “I bought a watermelon last week for Ghc 2.00. It was so bad that I had to ditch it.

“I asked the vendor why the melons looked whitish and watery; she told me that it might be because farmers add excess fertilizer. Watermelons currently are not good at all’’ he exclaimed.

Another consumer expressed his dissatisfaction “The watermelons are now expensive. The slices of watermelon they sell presently at GHC2.00 are even nowhere near the previous ones sold at GHC 1.00,”

“I think the farmers and vendors should find solutions to the whitish nature of the melons because we can’t buy them at exorbitant prices and not get the satisfaction we need’’.