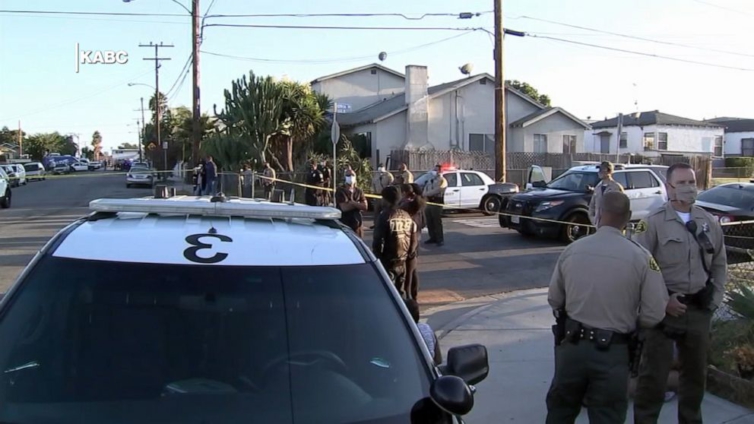 The sheriff’s department says that at about 3:15 p.m. local time two deputies tried to stop Kizzee, who was riding a bicycle “in violation of vehicle codes.”

When they approached him, he got off the bicycle and ran.

Sheriff’s Lt. Brandon Dean told reporters that deputies caught up to the suspect about a block away, and when they approached him, the man punched one of the deputies in the face and dropped items of clothing he had been carrying.

It was at that point deputies “noticed that inside the clothing items he dropped was a black semiautomatic handgun,” and that’s when both deputies opened fire, shooting the man several times, Dean said.

Investigators recovered a handgun from the scene.

The man, later identified by the Los Angeles County Medical Examiner-Coroner’s Office as Kizzee, was pronounced dead at the scene; an autopsy is scheduled for Tuesday.

This is #DijonKizzee, 29 yrs old and shot and killed by LA Sheriffs after being stopped for a bike violation. Cops handcuffed his lifeless body. While police investigations can drag on for months/years, cops have already claimed he ran away, and dropped clothes and a gun. #BLM pic.twitter.com/pM6mQfWLeQ

Neither deputy was injured, Dean said.

Activist Najee Ali, who is representing the family as is attorney Ben Crump, denies that Kizzee was a threat at the time of the shooting.

“Being in possession of a gun, but actually using a gun, having it in your hands are two different things,” Ali said, adding “he did not point the gun” at officers.

An undated photo of Dijon Kizzee, provided by his family.

The family is calling for Sheriff Alex Villanueva to release names of the deputies and for their “arrest and criminal prosecution,” as well as body cameras to be implemented throughout the force.

“This is not America. This is ridiculous. I don’t know what, what kind of society … We are human. I don’t give a damn what race you are. We are human beings.”

EVEN IF you punch a cop in the face and drop a gun on the ground (if that even happened), you don’t deserve to be shot in the back 20x and have handcuffs slapped on your corpse and have your body left in the street for hours!! justice for #DijonKizzee https://t.co/DWVpgSVuUX

The District Attorney’s Office and Office of the Inspector General are assisting in the investigation.

Kizzee’s death comes amid public protests over the August 23 police shooting of Jacob Blake in Kenosha, Wisconsin, and the May death of George Floyd in Minneapolis after an officer knelt on his neck.

Dean said the deputies have yet to be interviewed and were not wearing body cameras, which are not set to be rolled out until the fall, according to CNN affiliate KABC.

The Los Angeles Board of Supervisors on Tuesday approved $25 million to the sheriff’s department for body cameras.

Villanueva has estimated that it will take about 18 months to fully implement them.

Following the shooting, the activist group Black Lives Matter L.A. tweeted a call for protesters to gather in the area.

CNN affiliate KCBS/KCAL estimated as many as 100 demonstrators were at the scene Monday evening, chanting demands for justice. 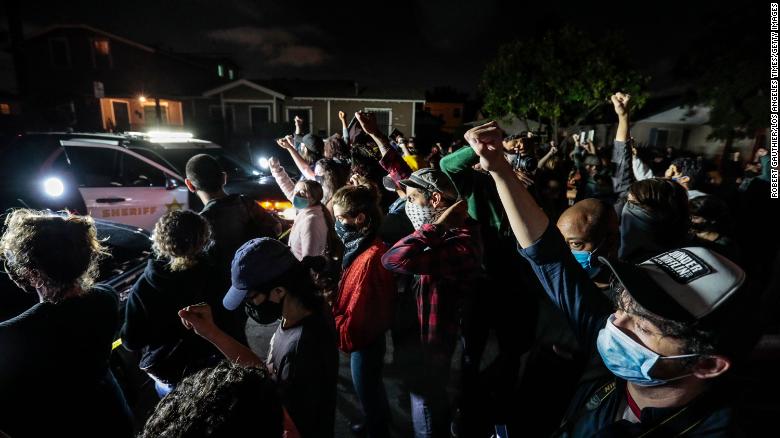 “How many more times do we have to gather out here, mourning the loss of our brothers and sisters,” one protester told KCBS/KCAL.

DISCLAIMER: The Views, Comments, Opinions, Contributions and Statements made by Readers and Contributors on this platform do not necessarily represent the views or policy of Multimedia Group Limited.
Tags:
Brandon Dean
Dijon Kizzee
Fatal Police shooting
Los Angeles