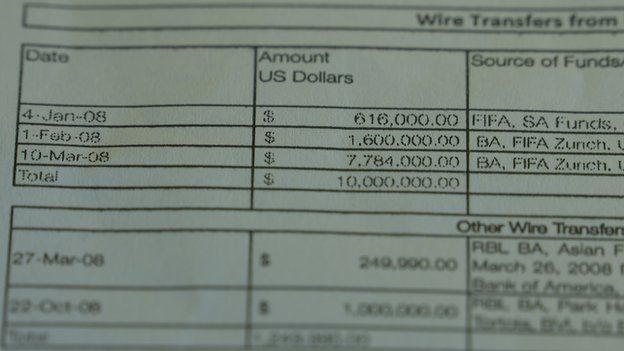 A BBC investigation has seen evidence that details what happened to the $10m sent from Fifa to accounts controlled by former vice-president Jack Warner.

The money, sent on behalf of South Africa, was meant to be used for its Caribbean diaspora legacy programme. 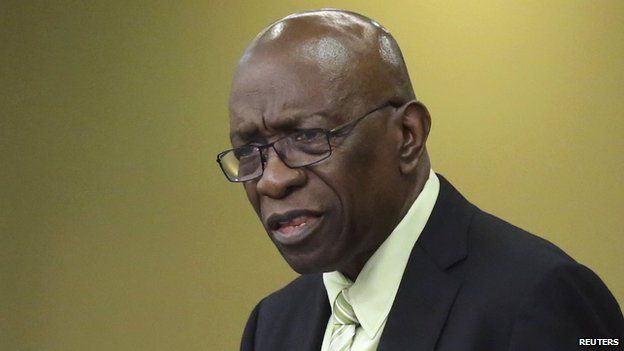 The 72-year-old, who has been indicted by the FBI for corruption, denies all claims of wrongdoing.

The papers seen by the BBC detail three wire transfers by Fifa.

In the three transactions – on 4 January, 1 February and 10 March 2008 – funds totalling $10m (£6.5m) from Fifa accounts were received into Concacaf accounts controlled by Jack Warner.

At the time, he was in charge of the body, which governs football in North and Central America and the Caribbean.

The money had been promised by South Africa's Football Association for its so-called diaspora legacy programme to develop football in the Caribbean. 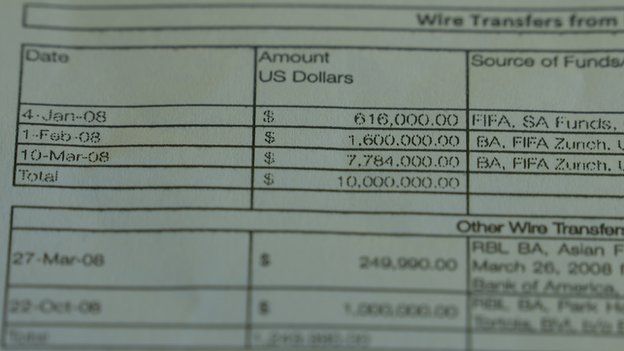 The documents detail exactly how and when the money was transferred

The documents reveal how the money was spent and moved around.

JTA Supermarkets, a large chain in Trinidad, received $4,860,000 from the accounts.

US prosecutors say the money was mostly paid back to Mr Warner in local currency.

The BBC gave details of its investigation to Brent Sancho, Trinidad and Tobago's sports minister and a former footballer.

He said: "He [Mr Warner] must face justice, he must answer all of these questions. Justice has to be served.

The documents also show $360,000 of the Fifa money was withdrawn by people connected to Mr Warner. 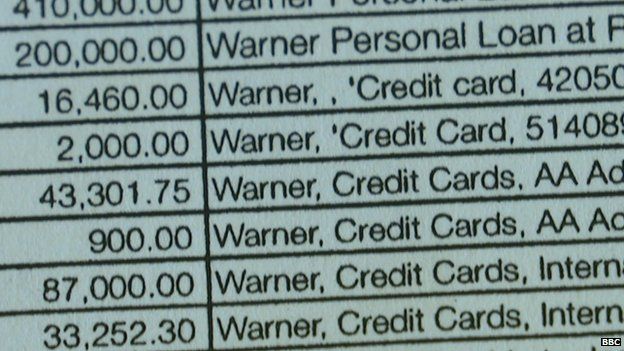 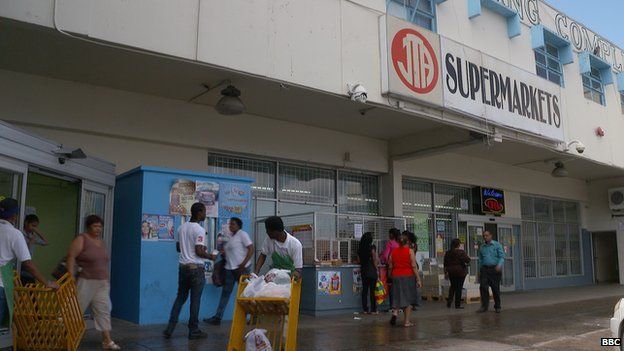 The documents show the largest personal loan Mr Warner provided for himself was $410,000.

Mr Sancho says he is now angry and disappointed.

"I'm devastated because a lot of that money should have been back in football, back in the development of children playing the sport.

"It is a travesty. Mr Warner should answer the questions," he added.

'The gloves are off'

Jack Warner is one of 14 people charged by US prosecutors over alleged corruption at Fifa.

The US Justice department alleges the 14 accepted bribes and kickbacks estimated at more than $150m (£97m) over a 24-year period.

He resigned from Fifa's executive committee and all other football commitments in 2011 amid allegations he had bribed his Caribbean associates.

He later stepped down as Trinidad and Tobago's security minister amid a fraud inquiry.

A key figure in the deepening scandal, in a recent statement he said he had given lawyers documents outlining the links between Fifa, its funding, himself and the 2010 election in Trinidad and Tobago. He said the transactions also included Mr Blatter.

"I will no longer keep secrets for them who actively seek to destroy the country," he said in an address on Trinidadian TV last week entitled "The gloves are off".

Speaking to his supporters at a rally later the same day, he promised an "avalanche" of revelations to come.

Mr Warner, who faces extradition to the US, was released on bail after handing himself in to police in the Trinidad and Tobago capital Port of Spain last week.

He says he is an innocent scapegoat who will soon reveal the truth of what happened inside Fifa.

The announcement of the FBI charges in late May has driven Fifa into its greatest crisis; last week its president, Sepp Blatter announced he was stepping down, only days after being re-elected to a fifth term.