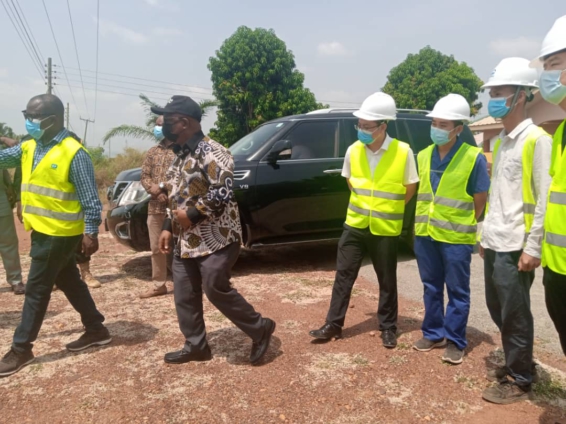 Volta Region’s much anticipated first-ever dual carriageway project is scheduled to be completed in December, 2022.

This was revealed by the Volta Regional Minister, Dr. Archibald Yao Letsa, when he inspected road projects under construction within the Ho Municipality.

Dr. Letsa noted that the contractor, China Railway No.5 Engineering, has returned to the site to complete the work without any further delay.

The 10.2km Sokode-Ho road project, being undertaken at a cost of GHS98 million, began in August, 2016, but was halted in September, 2017 after several challenges including funding. The resumption has been made possible by the release of funds to contractors, China Railway No.5 Engineering Ghana Limited.

Dr. Archibald Yao Letsa said he is happy about the progress of work on the road so far and hopes that by December, 2022 the whole process will be completed with some major facelifts becoming evident earlier.

“The contractor has assured the government that some facelifts will be seen by May, 2022 with the total completion in December, we are happy and hopeful that everything works out as planned,” he said.

Dr. Letsa noted that government is very much aware of the worries of residents about the initial slow pace of work and some other concerns.

However, he assured residents that there would no be any further delay on the project as the contractor is doing a great job on the road

“I know and appreciate your genuine concerns and we are promising that there would be no further delay on the work and by December, the road will be completed,” Dr. Letsa assured.

The Regional Minister advised the workers to work harder to clear all doubts from the minds of residents on the work on the road.

The Managing Director for the China Railway No 5, Mr. Peter Mu Hao noted that the project, which is 56% complete, would be completed on schedule.

DISCLAIMER: The Views, Comments, Opinions, Contributions and Statements made by Readers and Contributors on this platform do not necessarily represent the views or policy of Multimedia Group Limited.
Tags:
Dr Archibald Yao Letsa
Dual Carriageway
Volta Region