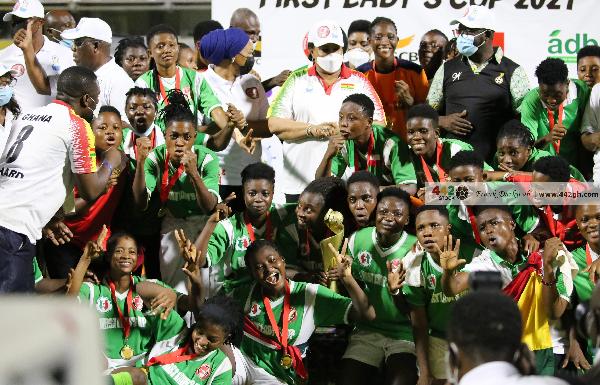 Hasaacas Ladies added more glitz to their year after beating Ampem Darkoa in the maiden edition of the First Lady’s Cup.

Sonia Opoku opened the scoring for Ampem Darkoa with a smart finish after running onto a through ball.

Ampem Darkoa went into the break with the lead but conceded in the second quarter of the second half when striker, Jafaru Rahama levelled the scoring for the Hasmal Ladies after slotting home a lose ball.

The game headed to a penalty shootout after the two sides were unable to find a winner in normal time.

Both teams missed their opening kicks then went on a scoring streak. However after Evelyn Badu rifled in Hasaacas’ fifth, Ampem Darkoa missed their final kick to gift Hasaacas the trophy.

Hasaacas won the tie 5-4 on penalties.

They club has added to their Women’s Premier League title, FA Cup, WAFU Zone B title and Super Cup title.