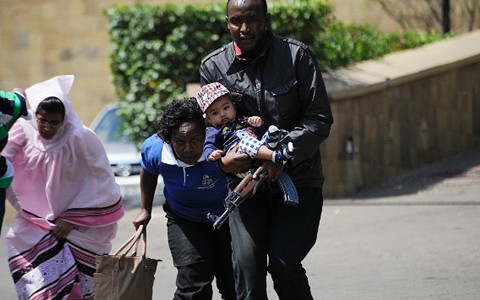 Kenya’s investigation into a bloody siege by Islamist militants in Nairobi has been joined by experts from the US, UK, Germany, Canada and Interpol.

He confirmed that five militants were dead and said the bodies of more were expected to be found.

Funerals are continuing to be held for the 67 civilian and military victims.

“We have moved to the next phase,” Mr Lenku told a news briefing in Nairobi, saying that he expected the forensic audit to take at least seven days.

He said he did not expect the death toll to rise significantly.

Several bodies are thought to be trapped under rubble after three floors of the building collapsed. Mr Lenku said he only expected bodies of militants to be found.

Work is continuing to establish their identities, including whether one was a woman, but he added: “We want to again request you to allow the forensic experts to determine whether that is true.”

Mr Lenku said he was unable to confirm whether there were any Britons or Americans involved, but said that 10 people were being held in connection with the attack.

Flags flew at half-mast across Kenya on Wednesday, as three days of national mourning began.

Somali Islamist group al-Shabab said it had carried out the attack in retaliation for Kenyan army operations in Somalia.

The militants stormed the Westgate centre on Saturday, throwing grenades and firing indiscriminately at shoppers and staff.

Twitter posts on an al-Shabab account said the group’s militants had held 137 people hostage, and claimed the hostages had died after security forces fired chemical agents to end the siege.

The posts could not be verified. A government spokesman denied any chemical agents were used, and authorities called on Kenyans to ignore militant propaganda.

Al-Shabab, which is linked to al-Qaeda, has repeatedly threatened attacks on Kenyan soil if Nairobi did not pull its troops out of Somalia.

About 4,000 Kenyan troops have been serving in the south of Somalia since October 2011 as part of an African Union force supporting Somali government forces.

Scores of people have been killed in Kenya since the incursion in a string of bomb and grenade attacks blamed on – and some claimed by – al-Shabab.

Late on Wednesday, one person was killed and four injured after a grenade was detonated in a market in the northern Kenyan town of Wajir – an area home to many ethnic Somalis. The Kenyan interior ministry said that investigations into the attack were ongoing.

The group is banned as a terrorist group by both the US and the UK and is believed to have between 7,000 and 9,000 fighters.

Its members are fighting to create an Islamic state in Somalia.