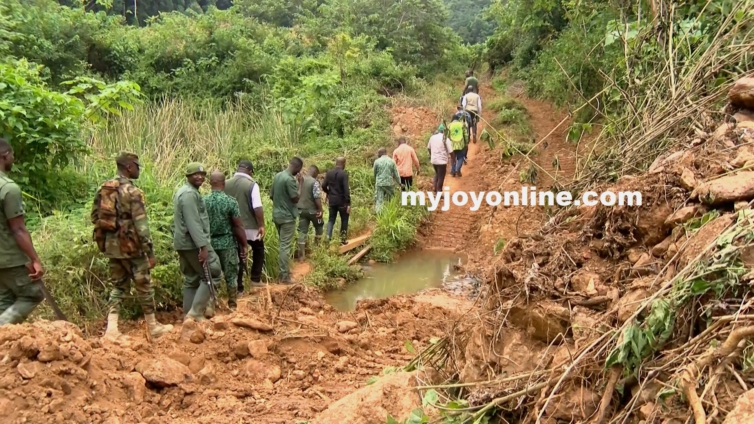 The Forestry Commission Taskforce working in the forest

A taskforce of the Forestry Commission has arrested 5 suspected illegal miners operating in the Bosomtwe Range Forest Reserve in the Ashanti region.

The five persons have been put before the Asante Bekwai Circuit Court.

The Bosomtwe forest reserve has been attractive to illegal miners in recent times.

It has in the last two years survived four illegal mining attacks as Forestry Commission staff on several occasions thwarted efforts of illegal miners who are bent on mining the precious mineral.

Despite the swift intervention of the taskforce which acted on tip off, the illegal miners, with the help of three excavators, destroyed part of the forest reserve in less than 48-hours after gaining access.

A taskforce of the Forestry Commission swooped on the illegal miners while they were preparing a heap of sand believed to be rich in gold ore for washing.

It followed a tip off on the illegal mining operations in the forest.

Deputy Minister of Lands in charge of Forestry, Benito Owusu Bio is worried at how the reserve has become target for illegal miners.

“This is the third time I am actually coming to this spot and I think this place is very endemic with illegal activities.”

Mr. Owusu-Bio ordered the burning of some equipment used by the illegal miners, including water pump machines and washers.

“The forest reserves are no go areas for illegal mining activities.  They are red zones so anybody caught doing this, we are going to make sure that we follow it to the letter to get them prosecuted.

We would be praying to the judiciary to expedite action on the cases.”

Authorities at the Forestry Commission lament the high cost of sustaining the fight against illegal mining in forest reserves.

Chief Executive, John Allotey, who condemned the spate of devastation associated with illegal mining says a chunk of resources as well as time is allocated to the anti-illegal mining operations.

He recounts how the Commission’s focus has in recent times shifted from illegal logging, prevention of bushfires and livelihoods associated with non-timber products to include illegal mining activities.

“Until the last decade, the focus has been on illegal logging and prevention of fire outbreaks and also looking at livelihoods. But now we have to deal with illegal mining. It becomes even bigger because the impact is more pronounced than illegal logging.”

“With illegal logging, you will harvest mature trees that have economic value so you still have the forest there although the quality would have gone down. But this time with illegal mining, what it means is that, they are clearing all the trees and then it impacts on the soil too. You know you will turn the top soil, you can’t find the soil again and then it is going to impact on the water as well.”

Deputy Minister of Lands in charge of Forestry, Benito Owusu-Bio admits though it is yet to totally eradicate activities, the fight will continue unabated.

DISCLAIMER: The Views, Comments, Opinions, Contributions and Statements made by Readers and Contributors on this platform do not necessarily represent the views or policy of Multimedia Group Limited.
Tags:
Ashanti Region
Bosomtwe Range Forest reserve
Forestry Commission
Illegal mining