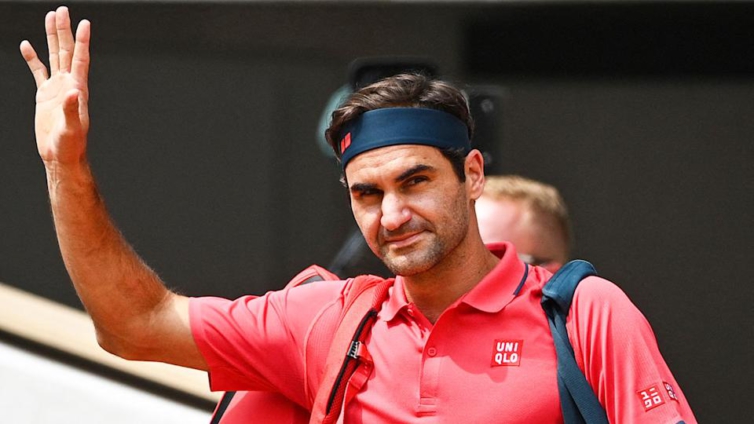 Roger Federer says he may pull out of the French Open if there is too much risk to his knee, and to his Wimbledon prospects, from playing on.

The Swiss beat Dominik Koepfer over three-and-a-half hours late on Saturday in only his sixth match since having double knee surgery.

Federer, 39, is due to play Matteo Berrettini in the last 16 on Monday.

But he said he will decide later on Sunday whether now would be the “perfect time to take a rest”.

Eighth seed Federer is playing in only his third tournament since January 2020 and says he is using it to build up fitness for Wimbledon, which starts on his favoured grass surface at the end of June.

“We go through these matches, we analyse them highly and look on what’s next,” he said.

“We will do the same here on Sunday, because I need to decide if I keep on playing or not. Is it not too much risk at this moment to keep on pushing or is this just a perfect way to just take a rest?”

After hitting 52 winners against Kwon to continue a fine clay-court season, Madrid runner-up Berrettini will be widely considered the favourite against 2009 champion Federer.

Federer increasingly struggled against Koepfer, ranked 59th in the world, in a gruelling contest that lacked quality and was played in a soulless atmosphere without fans.

In a lengthy opening set, Federer was unable to clinch any of five break points – including a set point in the 10th game – before an untimely double fault from Koepfer helped the Swiss to nick the tie-break.

The ruthless edge appeared, eventually, in the opening game of the second set when Federer whipped a crosscourt forehand past Koepfer to convert his third break point.

Little separated the pair, who traded three more breaks in a row, during another close and cumbersome set. The solid Koepfer was able to draw unforced errors out of the erratic Federer, who also struggled with his usually reliable serve.

Federer’s demeanour became increasingly despondent after Koepfer broke in the first game of the third set and he looked to be waning physically as the German remained in control.

Somehow, the Swiss shifted the momentum back in his favour out of nowhere with a break back in the eighth game and, after missing a set point in the 12th, took the third tie-break.

The fourth set looked destined for another tie-break before Federer dug deep to pick up his level and win the final three games for victory.

But there were no fans to celebrate the moment, which seemed particularly stark when it was a player who has entertained packed stadiums for so many years.

“There are still a few people here, I don’t know who they are: sponsors, journalists, my team too,” Federer said.

“I love tennis, I like to play. I might have been more nervous if the stadium had been full.”

The night matches start too late’ – does Roland Garros need to rethink the late starts?

For the first time, the French Open has introduced daily night sessions, which consist of one match starting at 9pm local time under the floodlights on Court Philippe Chatrier.

That meant the third set did not start until shortly after 11pm, the match eventually finishing not long before 1am, and left many tennis fans on social media platforms wondering who actually benefited from the late scheduling.

No fans were present on court because of the 9pm curfew imposed by the French government as part of coronavirus restrictions.

“They have got a very quick turnaround before their next match, probably get back to the their hotel between 2am and 3am, then have to reset.

“It is not easy, especially when your next opponent has long been and gone.

“I can’t imagine this is what Federer was expecting when he walked out on the court, to be there so late. It is one other thing to worry about. Less recovery time and less sleep, with Berrettini to come.”

Only one of the six night matches so far have been a women’s match – Serena Williams’ opener against Irina-Camelia Begu on Monday – and it would be optimistic to think a men’s match would only last two hours, making late finishes inevitable.

‘Federer is not supposed to play like this’ – analysis

It was a match that will live long in the memory, although not always for the right reasons.

Roger Federer is not supposed to play like this – even though this was just his sixth match in the past 16 months.

There was little fluency, and some horrible errors. But in his 40th year, and at nearly a quarter to one on a Sunday morning in a soulless and empty stadium, Federer still found the key to victory.

Night sessions are here to stay. They will look and sound great in years to come – as long as they don’t start as late as 9pm.

But they are absolutely no fun when there is a curfew in town.

DISCLAIMER: The Views, Comments, Opinions, Contributions and Statements made by Readers and Contributors on this platform do not necessarily represent the views or policy of Multimedia Group Limited.
Tags:
French Open 2021
Roger Federer
Roland-Garros