From 100 pieces of Moringa soap to 3k for the international market; the story of a proud entrepreneur 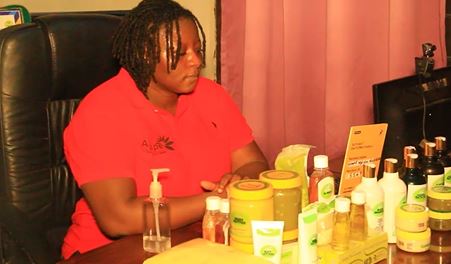 Esther Biile is a proud entrepreneur, making headlines in the production of Moringa soap among others in the Northern Regional capital, Tamale.

She has so far trained over 600 young people free-of-charge to start their own businesses.

Her happiest moment is seeing new clients in her business.

Esther’s business is booming and she is employing more hands to help deliver to the growing customer base.

In 2010, Esther got wind of CAMFED undertaking entrepreneurship training programs for young people.

She joined the process to sell her business idea in order to achieve potential empowerment.

That was how Esther got into entrepreneurship.

Her grandmother was into Moringa processing where she extracted the seed oil and the leaves for medicinal purposes.

Esther had to convince a team from CAMFED to buy into her Moringa business idea.

Esther was empowered to start the Moringa business.

Now, she has moved from producing one 100 pieces of Moringa soap in her small room to trading on the international market.

A success she says was achieved through patience.

Everyday, Esther and her team produce 3,000 pieces of Moringa soap.

They are also sold in Zambia, Nigeria, UK, USA and the Arab world.

Customers buy as high as 5 tonnes of moringa soap.

Over 600 people have been trained under her leadership.

Esther knows her time on earth is limited, so she doesn’t want to waste it living someone else’s life.

She does not also want to be trapped by dogma – which is to live with the results of the thoughts of others.

That’s why Esther intends to establish a factory to produce in larger quantities in the northern part of the country.

Among other things, she wants to produce Moringa bread, and Moringa drink.

Esther studied Accountancy at the Tamale Polytechnic in 2011.

She believes that creativity can solve unemployment issues in the country.

For her, there is no need for graduates to follow the footsteps of other entrepreneurs when they don’t understand how they started.

“Some of them just see someone’s business and it is booming. They will just run and go tap the idea and start. But at least you have to do your analysis and plan.”

Empowering women, according to Esther, is one of the smartest investments she wants to make.

It allows them to spend more on their families, drive growth in their economies and inspire others in their communities.