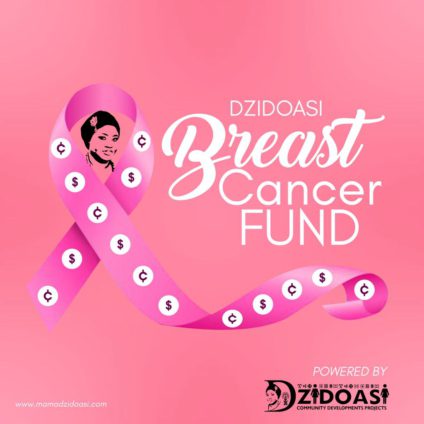 The queen mother of Gbi Abansi, Mama Dzidoasi I, has launched a fund to end breast cancer in the Hohoe Municipality of the Volta Region.

The fund would sponsor awareness creation, provide medical supports for affected patients, and some stimulus packaging for others who have been affected by the disease.

The fund is one of the 15 projects Mama Dzidoasi aims at implementing to commemorate the 15th anniversary of her enrolment.

As enumerated by the Queen, the other projects include Dzidoasi Teenprenuers Academy, where beneficiaries would have the privilege to undergo counselling sessions and be provided some form of education to shape their development into illustrious citizens in the future.

“If we could all get back to teenagers in our communities, we will build a great human capital where in 30 years, when I become that old queen mother, by the grace of God, these teenagers would be my pride, would be the engineers, the doctors, the lawyers, I would boast of. So that I see the reason to come with this academy for the teenagers”, she explained.

She detailed her intention to adopt a library and transform it to help children’s literacy development in her division, coupled with an investment in information, communication technology.

Aside from adopting a nursery and developing it into a Montessori, Mama aims to provide financial support to 15 older women under her Pamper the Aged Project.

She and her team would also undertake a menstrual hygiene campaign, where underprivileged young female adults in her division would be provided sanitary pads periodically.

“I seek again to put up a sanitary pad bank that would support young female adults in my community,” she said.

Other projects include providing skills training for women, spending time with kids in her division and putting up sporting activities.

Finally, she will seek funding to rehabilitate a dilapidated mill to help women in the Gbi Abansi division into rice production to maximise their profits.

Mama Dzidoasi I, who was enstooled in 2006, appealed for support “in any form” to undertake the 15 projects that aimed to improve the standard of her subjects’ livelihoods.

She, however, stated that the Breast Cancer Fund is paramount among the 15 projects because the disease took the lives of two of her close relations.

She said the Fund would be used to support the treatment of at least 15 breast cancer patients in the Abansi division among other initiatives.

“I cannot do this alone; 15 women will not be enough; I am asking friends, family, everybody to come and support the fund which will be entrusted in the hands of the Hohoe Municipal Hospital to enable increase the number of survivors within our area.”

Mama Dzidoasi, I made a personal donation of GhC15,000 as seed capital for the Breast Cancer Fund.

She emphasised her commitment to the development of the younger generation and stressed her continuous investment in teenagers in her area.

Ace broadcaster and host of Stand Point, Oheneyere Gifty Anti, lauded the initiatives by Mama Dzidoasi I and her commitment to the advancement of her subjects in the Gbi Abansi division.

She, therefore, described Mama as a “pride of womanhood” and assured of her unflinching support urging the Gbi Traditional Area to emulate same.

“Unity matters, and I call on the women to unite behind this warrior [Mama Dzidoasi I] to fight to bring something home.”

She made available copies of her books to stock in the to be adopted library.

The Hohoe Municipal Chief Executive, Noble Daniel Awume, called for collaborative efforts towards the development of the municipality and implored natives living in the diaspora to bring their friends and allies to invest in industries and other sectors of the economy of Hohoe.

“We seek your advice in advancing Hohoe to become the ‘Garden City’ of Volta Region”, he appealed.

The Volta and Eastern Regional Chair of the Association of Ghana Industries, Dela Gadzanku, said the historical background of Mama Dzidoasi, could be identified as a tourist attraction considering the age at which she was enstooled and her achievement within the fifteen years of rulership.

He expressed optimism of Hohoe becoming the “commercial capital of the Volta Region” when traditional authorities and other stakeholders, including himself, partner with the municipal assembly towards achieving this course.

“So just fight so that they do your road for you; once the road is done, Municipal Chief Executive, we will work and ensure that Hohoe is put at the rightful place of Ghana and Africa’s industrial development” he stressed.

DISCLAIMER: The Views, Comments, Opinions, Contributions and Statements made by Readers and Contributors on this platform do not necessarily represent the views or policy of Multimedia Group Limited.
Tags:
Dela Gadzanku
Gbi Abansi
Hohoe Municipality
Mama Dzidoasi I
Nanayere Gifty Anti
Volta Region