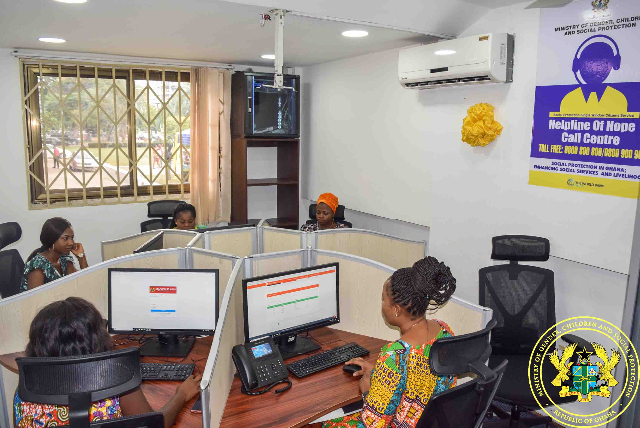 The Ministry of Gender, Children and Social Protection (MoGCSP) has launched its “Helpline of Hope” Call Centre to enable victims of domestic violence to report cases for prompt action or response.

This initiative forms part of the Social Protection drive of the Ministry, to ensure effective and efficient protection of the Ghanaian citizens.This Call Centre provides a full range of high-volume -inbound or outbound- call-handling services, including citizens’ support, multilingual customer support, interactive voice response and web-based services that are timely and essential.

Victims of abuses and other vulnerable persons can directly reach the Call Centre Managers through toll-free numbers 0800 800 800 and 0800 900 900 for their complaints or concerns to be received. Victims can also send their concerns or complaints through Text Messages (SMS) on free short code 8020 on all mobile networks.

The "Helpline of Hope" Call Centre according to the Minister, Otiko Afisah Djaba, is to give a voice to the voiceless and hope to the hopeless in society.

She indicated that the centre is being managed by well trained, dedicated and competent personnel who were ready to serve the nation and also restore hope to the vulnerable in society.

Otiko Djaba said that the launch of the Social Protection Helpline was a dream come true for her as Minister and for the target groups since it seeks to promote the welfare and rights of children, the vulnerable, persons with disability and the excluded.

“As a Ghanaian woman and mother, I see this as a great opportunity for my sisters and daughters out there who are suffering in silence to come out boldly to report all forms of abuses meted out to them. By this I am not leaving out the boys and men, my only reason for emphasizing on the female is that she is the worst affected when it comes to matters of gender-based violence. Women are the most affected victims of FGM, defilement, rape, child marriage, child prostitution, negative widowhood rites, allegations of witchcraft etc.”

The Gender Minister mentioned that a great number of calls are directed at the Ministry on a myriad of issues ranging from human trafficking, all forms of abuse such as rape, domestic violence, child abuse, mental health to hospital bills and school fees, which necessitated the establishment of the centre to provide the needed support.

She commended the President, Nana Addo Dankwa Akufo-Addo for endorsing the initiative by the Ministry to give voice to the vulnerable in society. She called on the victims and other members of society to report freely to the Centre for prompt actions.

The Director of the Department of Social Protection at the Ministry of Gender, Children and Social Protection, Dr. Rita Owusu Amankwa expressed her appreciation to all the stakeholders, especially the collaborating Ministries, law enforcement agencies, development partners and the office of the President, for making the establishment of the Helpline of Hope Call Centre a reality.

The Chief Justice, Her Ladyship, Sophia Akuffo who unveiled the plaque for the official launch of the Centre said: “I really like the name given to this all-important initiative “Helpline of Hope” since it is going to give hope to a lot of voiceless and vulnerable in the society.”

The Chief Justice commended Madam Otiko Afisah Djaba and her Deputy, Gifty Twum-Ampofo for the numerous initiatives and the hard work put in to establish the centre.

According to her, it takes a visionary leader to think through the lines to come out with this great initiative to provide a helpline for victims seeking support on issues of rape, child abuse, human trafficking, domestic violence as well as those affected by mental health.

“This will surely put smiles on the faces of many vulnerable and marginalized in Ghana. So Madam Minister, I say well-done for strengthening this aspect of social development”.

Justice Sophia Akuffo charged the agencies collaborating with the Ministry to see to the successful implementation of this laudable initiative and work very hard to offer solutions to grievances reported to the center.

Meanwhile, the Helpline of Hope Call Centre will offer counselling and psychosocial support to victims of abuse and people with mental health issues.