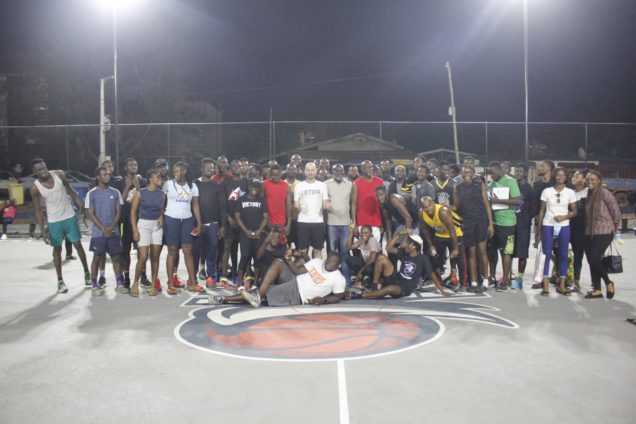 The Ghana Basketball Association (GBBA) in conjunction with the Lithuanian Basketball Federation (LBF) have carried out the first phase of drafts for the senior national basketball team.

The scrimmage which took place at the Adenta basketball court, represents the first phase of drafts for the national team ahead of an European tour in August.

It included male and female players scouted from the Greater Accra, Western and Central regions. Under the keen eyes of Jonas Vainauskas, a representative of the Lithuanian Basketball Federation, players competed amongst oneanother in select teams.

Vainauskas revealed to JoySports the modalities under which players were made to compete.

“We want to understand their position – we tried to get point guards to play in point guard positions, shooting guards in shooting guard positions and so on and so forth. First of all we tried to teach the players to understand their positions and then we implemented a simple set so not to overload them in the formation. We strictly stuck to the man defense because to play zonal at this level is quite crazy, unnecessary. They don’t really know the zone and don’t need it.

“So we actually implemented a very simple game structure that every player could expose only their best qualities. We tried to make a game that every player will exactly know their role and actually show their best skills. I’m really proud of the organization of the guys on the court,” he said in a JoySports interview.

In total, 20 females and 37 males from the aforementioned regions took part in the scrimmage. However scrimmages for both sets were under different formats.

Out of the 20 females, two, who are yet to be outdoored, have been selected to undergo training programs in Lithuania.

Meanwhile two sets of 16 boys categorised as ‘Team A’ and ‘Team B’ have been selected as first names.

Richard Borsah, a Ghanaian representative of the Lithuanian Basketball Federation explains that selection will undergo constant review till the team is ready to embark on the European tour in August.

“We also want to create a team to represent the nation in other international competitions. So far we don’t have anything like that and there are competitions going on all over and Ghana is missing in that. The team selected finally will go on a vigorous training tour in Lithuania. We call it the European tour in August.

“The toal number of males today were 37 and out of the 37 he had already selected 12 that were suppose to play against the 25 just so we can get a mix up. If someone from the other side [25] is better we just change for the other player [from the first team of 12] to go to the other side. So we were able to come up with the twelve but it’s not permanent.

“So what we’ve done today is to get two 16 player teams – they’ll continue the training programs he [Vainauskas] will leave behind.”

Borsah also revealed that the scrimmage will be held in the Ashanti Region on Tuesday for the first phase’s final part of selection.

“We’ll go to Kumasi and there are people who can come up and change it. Those moved out [of the 12] will go to the other side[25].

“Before he returns in February, we have some international friendlies lined up. We are still talking about the possibilities and modalities but the international parties have already accepted a challenge to come to Ghana and play the national team.” Borsah said to JoySports.

He also explains that in February the GBBA and LBF will organize scrimmages in the Northern part of Ghana.

“The program is trying to gather all the best players we can. A national team should have a national representation unfortunately for certain limitations we can’t start on that level but in February the second visit will be on, where we’ll go to the North.

“We call this the Southern sector [first phase] the second in February will be the Northern, then we’ll have gathered all the players in the country to put together a national team proper.”

On Thursday January 20, the GBBA will reveal the names of the first 32 male players selected for the national team.