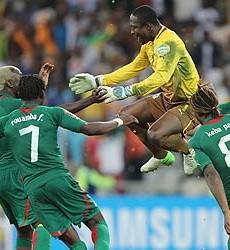 There is a constant flow of reactions from Ghanaian soccer fans after the Black Stars failed to book a final Nations Cup berth with Nigeria at the ongoing Africa Cup of Nations tournament in South Africa.

The Black Stars of Ghana yesterday lost 3-2 on penalties to a very determined and tactical Burkinabe side in a heated semi final duel which turned out highly controversial, courtesy shambolic officiating by Tunisian referee Jedidi Slim who seemed to have lost his way round his profession for most part of the crucial game.

The ritual of reviewing the performance of the national team after they crash out of major tournaments began late in the night and has continued unabated with fans expressing what they felt was the missing link in the team’s effort to rescue the much anticipated 5th Africa Cup win.

“Throughout the tournament the team failed to impress me. I’m disappointed with the head coach; our technical men failed us, they could not read the game. For me I’m disappointed in the players, they were not committed”, a soccer enthusiast confessed to Joy Sports.

Most fans are not taking lightly the fact that their beloved Black Stars have repeatedly made it to the semi finals of the Nations Cup since 2008 and have never brought the cup home. They are not the least impressed about the fact that the Stars managed to top a very difficult Group by beating Niger and Mali and drawing with DR Congo.

Even the spirited display by the team to see off Cape Verde at the quarter final seemed to have been forgotten.

The national team is being heavily chastised and the trend is likely to prevail at least until the team wins a silverware to show for their performances.

Meanwhile the Black Stars would have an opportunity to go one better than last nations cup fourth place finish when they face the Eagles of Mali at the Nelson Mandela Bay Stadium in Port Elizabeth on Saturday for the third place play off.