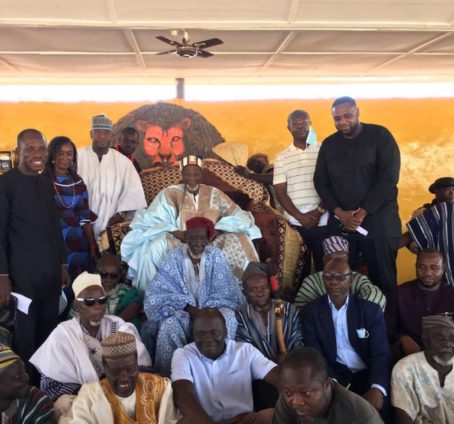 Board Chair of the Ghana Integrated Iron and Steel Development Corporation (GIISDEC) and MP for Yendi, Farouk Aliu Mahama has assured the people of Dagbon that before the end of 2022 there will be an investor to kick start the mining at Shiani.

He said the government also intends to build an aluminum smelter which will melt the ore and also create more jobs for the people of the area.

Speaking at the Gweba Palace when Board Members and management paid a courtesy call on the Yaa Naa, Alhaji Farouk said the Ameri gas plant will also be extended to Yendi.

“I want to assure you that we want to bring a smelter plant, we are also bringing the Ameri gas plant from Kumasi all the way to around the Yendi area and that is also a multi-million contract and it’s going to create employment and royalties to the Dagbon traditional council,” he said.

He said having the biggest iron ore in Dagbon, the board would work hard to unlock the resources collaborate with the chiefs to ensure there is a win-win situation.

“We will make sure we have a win, win situation with the chiefs because it’s the chiefs that owe the land. Therefore as a son of the land, I want to assure you that I will collaborate with you day and night,” he told the king.

Alhaji Farouk said with the strong collaboration he believes Shiani will have the biggest mining set up by 2022.

He said Shiani is a multi-billion-dollar project and they will not all the resources to go waste adding that they have set the tone with an action plan and the right budgetary allocation for work to start.

The MP for the area said the Yendi Office of GIISDEC will be the headquarters and a new benefiting ultra-modern office will be built by January adding that an operating office will also be built at Shaini.

He said Shaini is not the only place been developed adding that the Akpafu area in the Oti Region which has almost 1.3 million metric tons of iron ore will also be developed.

”With the support of the board the biggest natural resources exploration will start next week and we are starting in blocs,” he said.

The king of Dagbon, Yaa-Naa Abukari II welcoming the team to his palace said the visit is a recognition that the board and management recognise and are ready to collaborate with the traditional authorities as the custodians of the land and major stakeholders in mining in the country.

He said building a strong relationship with the traditional authorities is a form of ensuring all-inclusiveness.

“I, therefore, want to assure you of the readiness of the traditional authorises to collaborate with you to ensure you do a good job for our mother Ghana,” the King said.

The Yaa Naa said Shaini iron ore is one of the natural resources God has blessed the country with and like every resource mine in the country the benefits shall go to the people of Ghana and not only the Dagbon.

He entreated the team to be guided by national interest in their operations to help build Ghana and also do an excellent job as a form of justification for their inclusion in their affairs of the cooperation.

He said it was unfortunate that areas, where natural resources are sited, are often let out with less attention in terms of development.

The team also paid courtesy calls on several other chiefs in the area and met with a staff of GIISDEC.

DISCLAIMER: The Views, Comments, Opinions, Contributions and Statements made by Readers and Contributors on this platform do not necessarily represent the views or policy of Multimedia Group Limited.
Tags:
Dagbon
Ghana Integrated Iron and Steel Development Corporation
Shiani