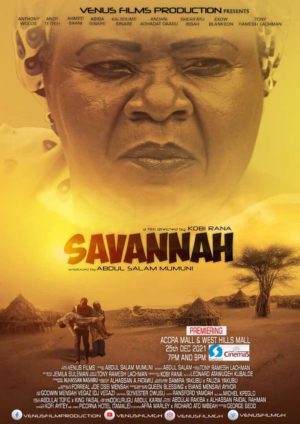 According to the group, the movie’s theme is centred on Female Genital Mutilation (FGM), a cultural practice they say is alien to the Northern Region and should not be allowed to misinform the world by denting the image of the region.

In a letter sighted by JoyNews, a legal practitioner and solicitor for the Dagbon Forum, A. F. Yakubu described the movie’s theme as fake and challenged the company to produce a victim of FGM in Dagbon to back their claim or halt the premiering of the film.

“Our clients say the said movie, which is in the nature of a documentary, falsely and maliciously presents female genital mutilation as being practice under Dagbon custom with gruesome images and depictions of cruelty and deaths resulting from such practices,” he said.

He argues that this portrayal will dent the image of the region and Dagbon if allowed to be premiered to the world.

“Please be informed that with all categorical forces that FGM is not part of Dagbon customs and Dagombas do not practice FGM in any shape or form; as such, the said movie is fake and emanate from fake media and constitutes a malicious and defamatory depiction of Dagbon, its people and culture,” he added.

He warned that any company or institution lending itself to propagate such a “fake and defamatory” documentary will be liable for defaming Dagbombas as a whole.

Mr Yakubu further advised the company and organizers of the movie to distance themselves from the film until they provided evidence.

In a related development, a Senior Lecturer at the Sociology Department of the University of Ghana, Dr Alhassan Sulemana Anamzooya, has written to the Minister of Tourism, Art and Culture to stop the movie from premiering.

According to him, if allowed to be premiered, the movie will misinform the world about a cultural practice alien to the Dagbom custom and traditions.

He said the title, geographical and architectural images and interspersing the English language with the Dagbani language in the movie links the FGM with the Dagbon people.

Dr Sulemana Anamzooya said FGM has never been the practice of Dagombas, questioning the use and purpose of the Dagbani language by characters in the movie.

He said FGM is a sensitive global issue considered as a harmful traditional practice that can be used by film producers to make money and attract public outcry but should not be done by misleading the world of its genesis.

“Ghana as a country has neither been noted for having high FGM rates nor promoting the continuation of it; the 0.005 % FGM rate in the country still deserves condemnation,” he added.

Dr Anamzooya said the Dagbon kingdom has never been known to practice FGM, adding that if some people in the north practice FGM, it behoves the company to do proper research to unearth ethnic groups that practice FGM and use their language in the movie.

“Northern region is the Savannah areas of Ghana, comprising five regions with several dialects, including Dagbani. Dagbon kingdom has never been known to practice FGM as far as our custom and practise is concerned,” he said

DISCLAIMER: The Views, Comments, Opinions, Contributions and Statements made by Readers and Contributors on this platform do not necessarily represent the views or policy of Multimedia Group Limited.
Tags:
Dagbon
Savanna
Venus Films