‘Savannah’ will not show in Tamale as promoters withdraw their support 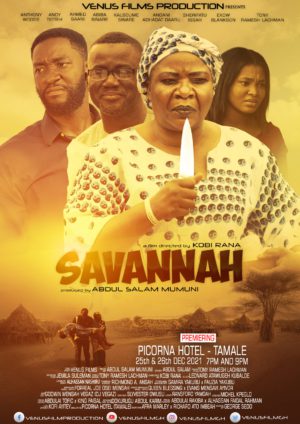 Venus Films Production’s movie, Savannah, will not be premiered in Tamale in the Northern Region as previously scheduled.

The movie which has faced severe backlash from the Dagbani people for misrepresenting them and their culture to the world was scheduled to premiere at the Picorna Gardens in Tamale on December 25.

The promoters of the movie stated that they are no longer interested in promoting and airing the movie in Tamale following the concerns raised about it.

The group of promoters including OBL Studios, one Mr Nashiru, King Faisal, and Abdul Rashid disclosed this to the Dagbon Forum on Thursday, December 23.

According to the group, the movie’s theme is centred on Female Genital Mutilation (FGM), a cultural practice they say is alien to the Northern Region and should not be allowed to misinform the world by denting the image of the region.

In a letter sighted by JoyNews, a legal practitioner and solicitor for the Dagbon Forum, A. F. Yakubu described the movie’s theme as fake and challenged the company to produce a victim of FGM in Dagbon to back their claim or halt the premiering of the film.

“Our clients say the said movie, which is in the nature of a documentary, falsely and maliciously presents female genital mutilation as being practice under Dagbon custom with gruesome images and depictions of cruelty and deaths resulting from such practices,” he said.

He argues that this will dent the image of the region and Dagbon if allowed to be premiered to the world.

He warned that any company or institution lending itself to propagate such a “fake and defamatory” documentary will be liable for defaming Dagbombas as a whole.

Mr Yakubu further advised the company and organizers of the movie to distance themselves from the film until they provided evidence.

DISCLAIMER: The Views, Comments, Opinions, Contributions and Statements made by Readers and Contributors on this platform do not necessarily represent the views or policy of Multimedia Group Limited.
Tags:
Dagbon
Savannah
Tamale