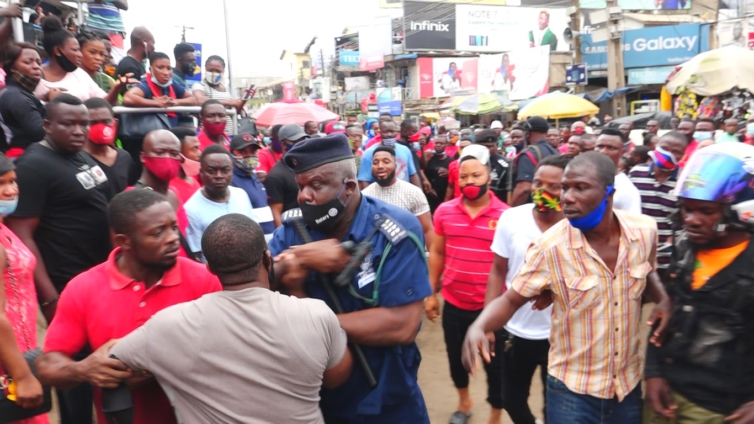 Local traders at Tip Toe Lane in Nkrumah Circle have clashed over the reopening of shops belonging to undocumented foreign retail traders.

President of the Ghana Union of Traders Association (GUTA), Dr. Joseph Obeng was at the scene and called for calm as he predicted more clashes if the government does not enforce Ghana’s retail laws.

“What has happened here today should be a clear warning to the government. Things could get worse in the future with more clashes if the government does not stick to its responsibility of enforcing laws governing retail trade,” he stated.

The development attracted some police presence, although they had a hard time calming tension.

Head of Nima Police Division, DSP Abraham Quaye told Joy Business “we have called for reinforcement and are very heavy on ensuring there is calm here.”

The Ghana Union of Traders’ Association (GUTA) had in an earlier press statement demanded the closure of shops belonging to illegal foreign traders at Circle in Accra.

In the statement, GUTA President stated that following an inspection of documents by the committee on Foreign Retail Trade in the country, it was discovered that over 90% of the foreigners did not meet the requirements to operate in Ghana.

However, despite their illegibility to trade, these foreigners have blatantly refused to close their shops in accordance with the law, says the association.

“We hereby want the authorities and the general public to note that these recalcitrant foreigners have taken the laws of our country into their own hands with impunity while the authorities look on unconcerned,” the statement read.

According to the GUTA, per the ECOWAS rule of origin, foreign traders from the ECOWAS sub-region are only permitted to trade in goods that are manufactured in their respective countries.

And any other attempt to trade in goods that are not manufactured from one’s respective country will demand that the trader satisfies the GIPC conditions on retail trade in the country.

Last year, GUTA locked down several shops in the Ashanti Region owned by foreign retailers over similar breaches of retail protocols in the country.

They cited Ghanaian laws to justify their action, insisting that they have been left with no choice than to move into the markets and lock the shops up themselves because the law enforcement agencies fail to do their work.

DISCLAIMER: The Views, Comments, Opinions, Contributions and Statements made by Readers and Contributors on this platform do not necessarily represent the views or policy of Multimedia Group Limited.
Tags:
GUTA
Kwame Nkrumah Circle