Ghanaians urged to take advantage of benefits of insurance 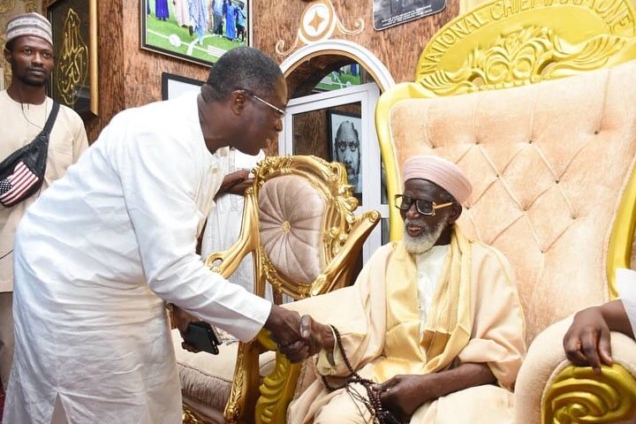 The Board Chairman of Imperial General Assurance, Ivan Avereyireh, has urged the Muslim community and Ghanaians in general to take advantage of insurance policies to lessen their financial pressures during unforeseen circumstances.

He underscored the importance of insurance in improving the wellbeing of individuals and families, particularly group or personal accident insurances which provide compensation to the insured in the event of injuries, disabilities or death.

Mr. Avereyireh made the appeal when he led a delegation from Imperial General Assurance to pay a courtesy call on the Chief Imam, Sheikh Osman Nuhu Sharubutu.

He used the opportunity to congratulate the Chief Imam on the occasion of his 103th birthday. He appealed to Muslim youth to be cautious in their celebration during Eid-ul-Fitr, the end of Ramadan, to avoid motorcycle accidents.

The Managing Director of Imperial General Assurance, Robert Wugah, presented a cash donation, bags of rice, gallons of cooking oil and other food items on behalf of the Board, Management and Staff of the company to the office of the Chief Imam.

Mr. Wugah commended the Chief Imam for serving as a symbol of religious tolerance for the peace and unity of the country.

For his part, Sheikh Sharubutu thanked Imperial General for its kind gesture and underscored the importance of giving, particularly during Ramadan, to invoke the blessings of Allah.

He called on Ghanaians to protect the peace of the country by living in peace and harmony with each other.

Imperial General Assurance is a fully re-capitalized non-life company in line with the new minimum capital requirement by the National Insurance Commission of Ghana.