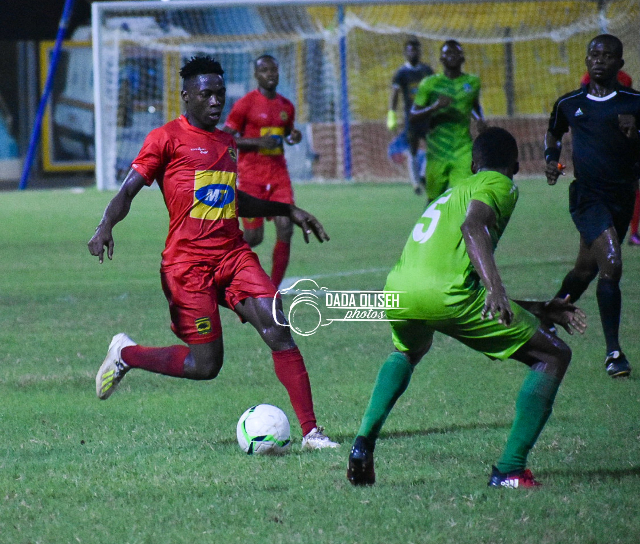 Asante Kotoko took a giant step in the title race as Hearts of Oak fell off.

WAFA thumped Ashgold in Sogakope as Medeama kept their charge.

Asante Kotoko have been formidable in Accra so far this season. Three trips, three wins scoring eight goals in the process whilst conceding just three goals.

Due to the renovation of the Baba Yara Sports stadium, Kotoko will be playing in Accra for the remainder of the season. News that will be pleasing to Maxwell Konadu.

Paa Kwesi Fabin started his tenure at Aduana Stars on a high after a 1-0 win over Dreams in Dawu.

A trip to the Theatre of Dreams after being dumped out of the FA Cup by Bechem United was a stern enough test for new coach Fabin.

An intelligent free-kick by Isaac Kwain in the dying embers of the game gave the Fire Boys their second away victory of the season and Fabin’s first.

Hearts drawing away from the title race

Nii Odoom and his side have never gathered enough momentum this season despite having some good results.

Successive wins have been hard to come by with the Phobians yet to win two straight games this season. Their recent fallout was a draw against Elmina Sharks taking their tally of drawn games to five – third highest in the league.

Hearts, as a result, are now six points off the title race and Odoom will need a winning run to keep their title hopes alive.

WAFA have slowly built a reputation of being massive demoralizers at Sogakope over the past few seasons.

Their most recent victims were AshGold who suffered a 6-1 defeat at the hands of the Academy Boys.

In 2015, Wafa beat Hasaacas 4-1. A year later, they thumped Hasaacas 5-0. In 2017, giants Hearts of Oak were walloped 5-0 in Sogakope with Dreams also suffering the same scoreline a year later.

Medeama concluded matchday 12 on Monday beating Great Olympics 1-0. The only goal of the game was scored by Prince Opoku Agyemang making it nine goals in 11 appearances this season.

The victory sends the Mauve and Yellows joint top of the table level on points with Berekum Chelsea and Aduana Stars.

Perhaps, this could be the season Medeama win their first-ever Ghana Premier League title.

DISCLAIMER: The Views, Comments, Opinions, Contributions and Statements made by Readers and Contributors on this platform do not necessarily represent the views or policy of Multimedia Group Limited.
Tags:
GHPL
Medeama
WAFA