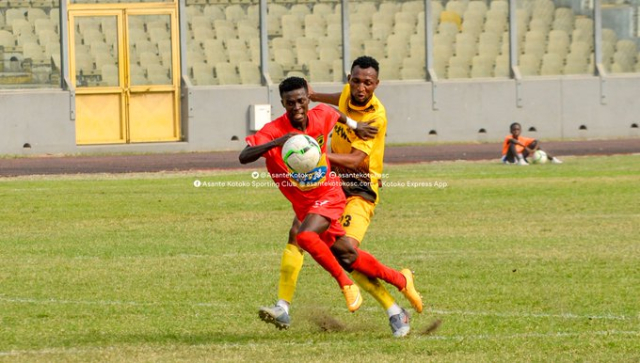 Asante Kotoko and Ashanti Gold played out a 0-0 draw in the Ashanti derby at Baba Yara Stadium on Sunday.

The game which was played behind closed doors due to Kotoko’s home ban failed to produce no goal because the two teams were not clinical upfront especially Ashgold who had the majority of the chances.

Despite the draw, Ashgold have moved to the top of the table while Kotoko are now second.

In Accra, Hearts of Oak scored in injury-time to overcome a stubborn Bechem United side at the Accra Sports Stadium.

The first half ended one-all after Kofi Kordzi converted a penalty to cancel out 16-year-old Prince Adu Kwabena’s strike from the spot.

Hearts took the lead 64th minute through captain Fatawu Mohammed who hit a thunderbolt after he was set up from a corner kick.

But Bechem fought back to restore parity in the 75th-minute courtesy Hafiz Konkoni after a lovely move from midfield.

With the match looking to end in a stalemate, Kofi Kordzi powered home the winner for the Phobians in the 94th minute.

Seven goals were produced in Dansoman as Liberty Professionals shocked title contenders Aduana Stars 5-2 on their return to the Carl Reindorf Park.

The Scientific Soccer lads, who had not played at home since January 19, 2020, produced an incredible performance and deservedly beat Ogya club.

Yahaya Mohammed, who scored a brace, has 10 goals and is the joint-top scorer with Inter Allies Victorbien Adebayor.

Elmina Sharks shocked Medeama 2-1 in Tarkwa, WAFA played out a goalless draw with Dreams FC, and Ebusua Dwarfs came from behind to beat Karela United in Cape Coast.

DISCLAIMER: The Views, Comments, Opinions, Contributions and Statements made by Readers and Contributors on this platform do not necessarily represent the views or policy of Multimedia Group Limited.
Tags:
GHPL
Kotoko