Joel Bortey: Is having Asantehene’s image on Kotoko jersey abominable? 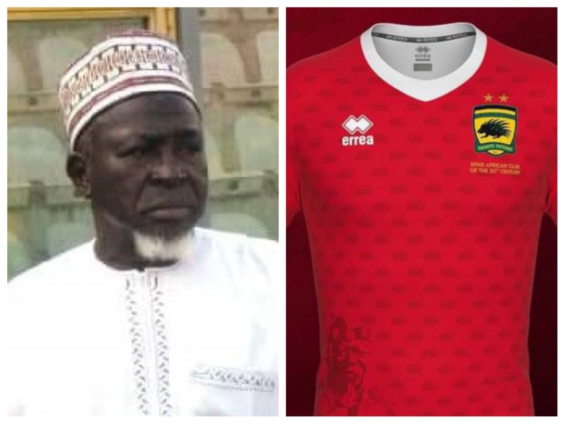 Bankroller of King Faisal football club, Alhaji Grusah, said “it’s uncivilized to have put ‘Otumfour’ on the Kotoko jersey, in fact, it’s a village thing. Otumfour is more than that, he does not go to war and lose.”

“Maybe these Asante’s don’t know how Otumfour is valued. Who doesn’t know he is the owner of the club? Which team does that in the world?” he said in an interview with Kessben FM.

“We put sponsors on jerseys. This is not maturity, they already done it, but they can still go back and change it,” he added.

But how factual is this? Is it really a bad practice to put a King and patron of a club on the club’s jersey?

A bit of history on jerseys worldwide

Clubs in the past wore suits, plain white clothing and whatever could be used to identify them as a team/club/country. Sponsors on jerseys were even forbidden at a point in history, names and numbers were barely seen on jerseys.

The main purpose for which a club makes a jersey is to give it identification. Any other factor is secondary.

With clubs being more creative in their designs, jerseys became an art and made the game of football more colorful and attractive.

Alhaji Grusah’s comments on Kotoko’s 2022/23 season kits were unnecessary and were just out of rivalry.

Both clubs are Kumasi based and it will be rather shocking for him to praise the works of his rival.

Why I disagree with the owner of King Faisal

With centuries and decades of evolution, jerseys have now become a commodity in today’s game. Iconic jerseys of the past and now sold for hundreds of thousands because of the stories they tell.

Each jersey worn has a place in history and definitely have acquired some resale value.

Clubs in Ghana do not take advantage of the fact that jerseys are iconic and are valued by fans hence less focus by clubs on them. 20 years from now do you know how much Hearts of Oaks 100-year anniversary jersey will be sold for?

To the points Alhaji Grusah made. First, you do not make a jersey because you are wearing it for a sponsor to put a logo on.

Until 2006 Barcelona did not have a shirt sponsor, many clubs in various leagues in Europe did not adopt the sponsorship aspect till it became a big-time money-making avenue. That is enough evidence that it is not their sole purpose.

Secondly, having the face of the King of the Asante kingdom on the jersey does not devalue him as the leader. Rather, it spreads his name to a wider audience.

Don’t forget Asante Kotoko will be playing on the continental stage. Otumfuo has been the backbone of the club and the club having his face on their shirt can only be a means of showing appreciation to a face very few people beyond the Kotoko circumference know about in terms of his good deeds toward the club.

Beyond just promoting his name, it will be unreasonable to comment about war and liken it to football as a sport because they are not the same. In promotion of the jersey, it is boldly written: “Celebrating the Pillar of Peace: His Royal Majesty Otumfuo Osei Tutu II.”

This adds more value to the jersey rather than taking away from it. There is clearly a story to tell celebrating a positive figure.

Finally, Asante Kotoko are giving themselves commercial value and that is tapping into their fan base. A way of connecting to a fanbase is through what you give them commercially because they are your consumers.
Asante Kotoko won the just-ended 2021/22 Ghana Premier League title. Their popularity amongst Ghanaians would definitely have risen, those who once lost love will be willing to come back due to the recent glory. What wins the hearts of fans is how attractive you are.

It can be through your style of play, your results and dominance on the pitch, it could be how receptive you are to them, and also how flamboyant you are.

As a club that is looking to restore its status at the top, Kotoko needs to maintain that level of attraction.

Jersey sales are a major source of revenue for the club and can definitely be leveraged as a means to help the development of the club, something very few clubs in Ghana focus on.

Both clubs always have their jerseys sold out but are not known for silverware in the current era of football.

Arsenal’s last league title was in 2003-04 and Venezia were relegated from the Italian Serie A after spending just a season there. What they are both known for is their iconic jerseys.

Arsenal’s shirts are the 6th most popular in football and sell an average of 800,000 a year. Venezia on the other hand is a small club in Italy but 95% of their jersey sales are outside Italy.

Both clubs always sell out their jerseys. Why? Because these jersey sales which fall under commercial activities of clubs are a major source of revenue for them and relevant in the global footballing community.