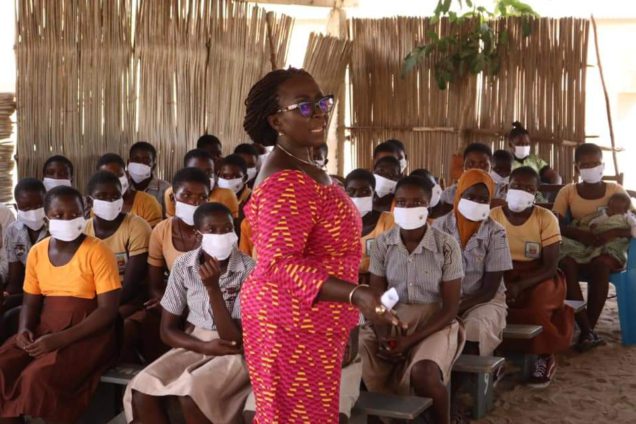 Groom Dat Girl, a social group committed to issues of women and girls in the Volta Region has taken its outreach to one of the deprived communities in the Ketu South Municipality.

Member of Parliament for Ketu South, Abla Dzifa Gomashie who was also present engaged the girls on how to handle themselves as they go through physical, emotional and psychological changes during the adolescent period.

The group and the legislator took turns to teach the girls signs of breast cancer, how to examine oneself, the necessary steps to take should one detect a problem, menstrual and personal hygiene as well as the need to abstain from sexual related activities until they are of legal age.

Sanitary pads and other items were distributed to the girls. The month of October is dedicated for breast cancer awareness campaign.

She noted that back in the days, there was less opportunities for organisations to teach and groom girls to fully embrace themselves as they approach the adolescent stage, therefore the need for such engagements to be taken to other communities.

According to her, it is heart warming and fulfilling to see women in the media take up such a huge task aside their professional work as journalists.

She urged other female journalists as well as other institutions to emulate the good work of the social group.

A representative of the group, Tilda Elinam Acorlor, an award winning sports journalist indicated that female journalists in the region are tired of folding their arms, therefore, have decided to empower young girls to live a purposeful life.

“We decided on this particular school, Agbekpui because of the negative reports on social vices which might affect them. We are here to encourage them and give the girls hope,” she said.

She noted that it is the vision of Groom Dat Girl to take their outreach to every part of the country, especially the Volta and Oti regions.

She further added that plans are being made to check on schools visited earlier to track their progress.

Member of the group, Sumaiya Salifu Saeed bemoaned the lack of funds to enable them reach out to other deprived schools. She urged other organisations and well-to-do individuals to join the good cause.

The student leadership expressed gratitude to the group and the Member of Parliament for the kind gesture and the training they received.