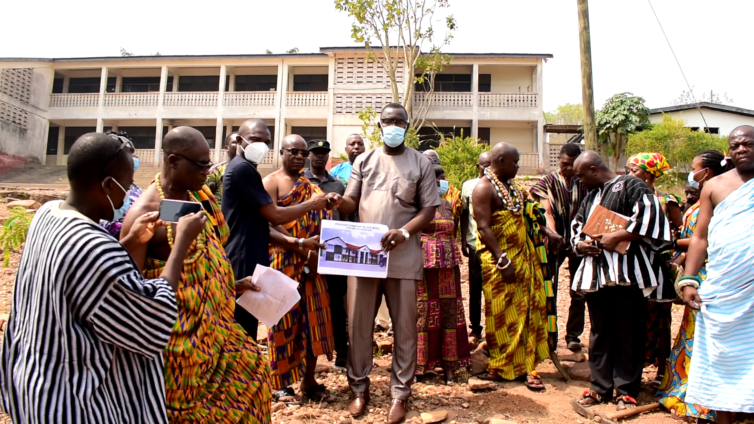 The Ghana National Petroleum Corporation Foundation has stepped in to resolve the accommodation challenges of the Taviefe Senior High School in the Ho Municipality of the Volta Region.

The foundation has cut sod for the construction of a 160-bed capacity and ancillary facilities, under its education thematic area, following an appeal by Taviefe Traditional authorities.

The Taviefe Senior High School established in 1983 was absorbed into the public sector in 1989.

A major challenge for the school had been lack of dormitory for female students.

The Headmistress of Taviefe Senior High School, Rose Menu explained that three classroom were converted into sleeping places for the female students, since the 150-bed capacity dormitory facility could not accommodate the large numbers.

“Our boarding girls population stood at 415, with only one dormitory block, which contains six rooms. This was able to accommodate just about half of the number.”

“When all the 3 year groups were in school, some of the girls had to be moved to the headmistress and the school housemistress bungalows to sleep”, she explained.

Realizing the impediment of the situation on academic activities, traditional authorities initiated a campaign to resolve the challenge.

Through the help of Ghana’s Ambassador to Germany and a daughter of the soil, Gina Blay, the Ghana National Petroleum Corporation Foundation has cut sod for the construction of a 160-bed capacity dormitory block and a 20 seater sanitary facility.

The Executive Director of the Foundation, Dr. Dominic Kwesi Eduah, said the project adds up to the about 20 projects already ongoing in the Volta Region, financed by his outfit.

This he said was as a result of a decision to extend areas covered by the Foundation beyond only oil-rich areas to the entire country “since the oil belongs to all Ghanaians”.

He highlighted projects in education, water and sanitations which are scattered across the region and are at various stages of completion.

Dr. Eduah said the structure which is expected to competed in four months will be named after Gina Blay, and in effect she will finance the annual maintenance cost.

The Paramount Chief of Taviefe, Togbe Tenku Kojo Ziga III, appreciated the commitment by the GNPC Foundation to help eradicate the accommodation challenge.

He also extolled the Blay Family for the role they have played in influencing the organisation to allocate the school a project which will not only make room for enough students but also improve academic performance, hygiene and the health of the students, especially females.

The school’s management, however, appealed for the construction of a fence wall around the school, beds and an official vehicle.