Government business ought not to be disrupted because of disagreements on E-levy - Oppong Nkrumah - MyJoyOnline.com 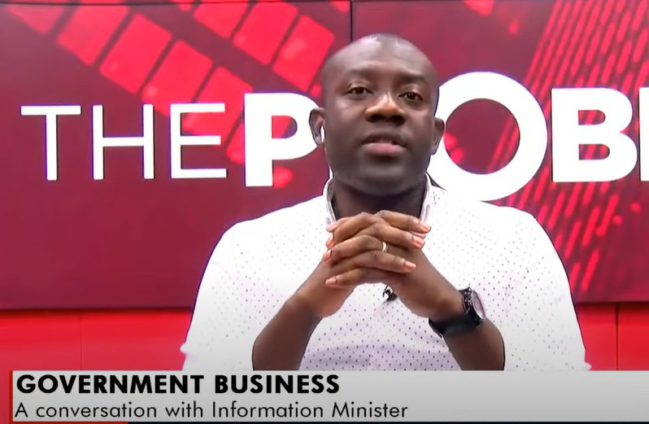 Kojo Oppong Nkrumah on The Probe on JoyNews

Information Minister, Kojo Oppong Nkrumah has said that it is unfair for Members of Parliament, who do not support the E-levy Bill, to attempt to disrupt government business.

According to him, extensive consultations have been carried out on the e-levy and some MPs have been convinced about the need for it, while others still choose not to support it.

“Although they have a choice to make any decision, they, however, ought not to obstruct the process simply because they do not support it. If we do that we would be degenerating into a society of chaos and lawlessness,” Mr. Nkrumah said on The Probe on JoyNews on Sunday.

He stated that “just because somebody does not agree with something, then they are going to deliberately obstruct the organs of government from working, that is not how we want to run our democracy.”

The Information Minister explained that the conversations on the e-Levy and other government policies ought not to degenerate into blows and use of harmful implements to attack one another, especially in a civilised democracy.

“So our expectation is that when Parliament resumes, we can go through the process of considering the e-levy and take a decision on it ,” Mr Nkrumah said.

Debate on the E-levy Bill was halted on December 20 after proceedings in the House turned chaotic with the MPs engaging in a fight during a headcount on whether or not to accept the Bill under a certificate of urgency.

The House hoped that suspending the discussions after the brawl, would allow for further consultations on the E-levy Bill.

Parliament will be reconvening on January 25 and members are expected to deliberate and vote on the Bill.

Meanwhile, the Information Minister maintains that the e-levy remains an instrumental part of the fiscal framework for 2022.

He explained that mobilising revenue is the government’s main option to help satisfy the many demands of the public, especially since Covid-19 has affected economies across the globe.

“There are only three ways of satisfying the demands [of the people]. One, you wait for someone to gift it to you, borrow for it or pay for it. Today because of donor fatigue and global hardships, you are not necessarily going to get a lot of gifts to respond to the needs,” he said.

Mr Nkrumah added that, “especially because of Covid and the kind of borrowing that economies around the world have had to do, you are almost at the point where you cannot borrow so much to respond to the legitimate needs of the Ghanaian. So the third and only option that remains is the revenue mobilisation effort.”