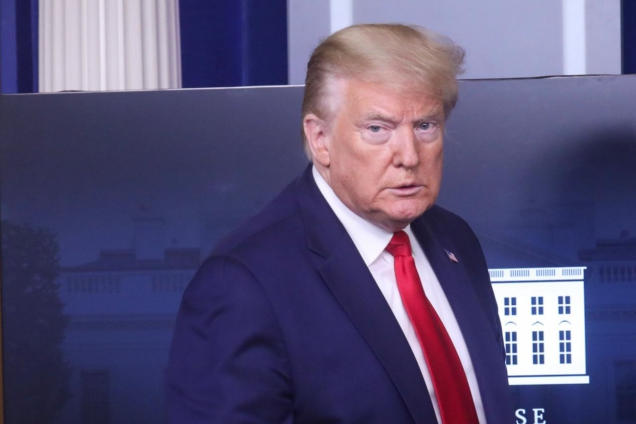 Six times this month, in a vile attempt to punish a political rival, President Trump has tweeted about a decades-old conspiracy theory about MSNBC’s Joe Scarborough.

Twitter  has come under increasing pressure to remove the tweets, but the company is not bending, despite being called out by some of the people personally hurt by the posts.

Trump’s smears about Scarborough center on the 2001 death of Lori Klausutis, who worked in his Florida office when he served in Congress. Scarborough’s opponents and a bevy of internet trolls have tried to blame him for her death, even though he was in Washington at the time.

Trump brought up the baseless theory once in 2017, causing a surge of newfound attention about Klausutis’ death — and unwelcome phone calls to her family members.

Trump ratcheted it up on May 4 and said “Concast,” his derogatory name for MSNBC’s owner Comcast, “should open up a long overdue Florida Cold Case against Psycho Joe Scarborough.” Since then, his tweets have become even more pointed, essentially accusing Scarborough of murder.

Family members and friends of Klausutis have watched, some of them in disgust, but have refrained from commenting publicly for fear that they’d just further the conspiracy theory.

“Nearly 19 years ago, my wife, who had an undiagnosed heart condition, fell and hit her head on her desk at work. She was found dead the next morning.

“Her name is Lori Kaye Klausutis and she was 28 years old when she died,” he wrote in a letter to Dorsey dated May 21.

“Her passing is the single most painful thing that I have ever had to deal with in my 52 years and continues to haunt her parents and sister.”

T.J. said he has tried to honor his late wife by protecting her memory “as I would have protected her in life.”

He said that’s why he was writing to Dorsey.

“The President’s tweet that suggests that Lori was murdered — without evidence (and contrary to the official autopsy) — is a violation of Twitter’s community rules and terms of service,” he wrote. “An ordinary user like me would be banished from the platform for such a tweet but I am only asking that these tweets be removed.”

Scarborough’s co-host and wife Mika Brzezinski has also applied pressure, including on their program “Morning Joe.”

“You can keep tweeting about Joe, but you’re just hurting other people,” Brzezinski said to Trump on the air last week.

She publicly asked for a meeting with Dorsey and said, on Twitter, that “it’s just crazy that Trump, the chief law enforcement officer of the US is using the power of the presidency to harass someone who is a critic.” She said it’s “nuts that this is accepted. Nuts.”

On Sunday, when CNN Business asked Twitter if Trump’s “cold case” tweets violated its rules and if any action would be taken, the company declined to comment.

On Tuesday morning, New York Times columnist Kara Swisher published the Klausutis letter and Brzezinski read it on the air.

Three hours later, Twitter told CNN Business that it would not be removing the tweets.

“We are deeply sorry about the pain these statements, and the attention they are drawing, are causing the family,” a Twitter spokesperson said. “We’ve been working to expand existing product features and policies so we can more effectively address things like this going forward, and we hope to have those changes in place shortly.”

The company did not provide any details on what “product features and policies” it has been working to expand.

Last year, Twitter said it was instituting a policy that would make some exceptions for world leaders like Trump. The company said it planned to place a disclaimer on future tweets from world leaders that break its rules but which Twitter decides are in the “public interest.”

It is not the first time conservatives have sought to enflame a conspiracy theory about the death of a political staffer in order to hurt a Democratic rival.

Rich’s brother later called on the likes of Hannity to “take responsibility for the unimaginable pain” they had caused in spreading baseless information about how Seth Rich died.

On Tuesday morning, the President posted twice more about Scarborough, seemingly in response to news coverage of his behavior. He pointed out that the conspiracy theory was not a “Donald Trump original thought, this has been going on for years, long before I joined the chorus.”

“This is much like what Trump did with birtherism,” New York Times television critic James Poniewozik commented. “People may now believe he invented it, but there too he took a conspiracy theory already fermenting in the swamp and popularized it” when other politicians wouldn’t. “Original thoughts have never been his thing — shamelessness is.”

DISCLAIMER: The Views, Comments, Opinions, Contributions and Statements made by Readers and Contributors on this platform do not necessarily represent the views or policy of Multimedia Group Limited.
Tags:
Lori Klausutis
Scarborough
Trump
Twitter