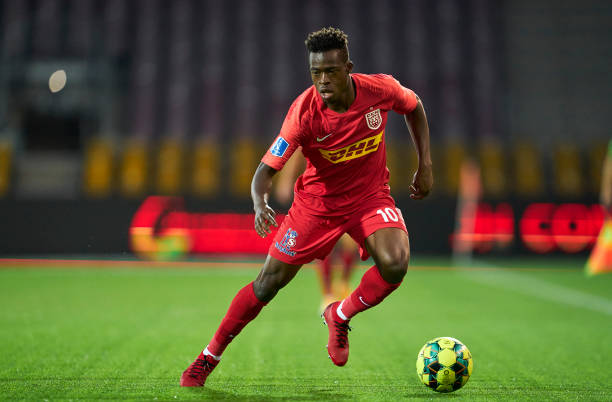 Mohammed Kudus has urged FC Nordsjælland winger, Kamaldeen Sulemana to join him at Ajax, describing him as the ‘perfect player’ for the Dutch champions.

Sulemana shot into the limelight for Nordsjælland this season, scoring 10 goals and providing four assists in the league.

The 19-year-old’s impressive performances have caught the eye of many European clubs including Manchester United, Liverpool, Ajax, Bayer Leverkusen and Olympique Marseille.

So far, Liverpool and Manchester United have sent scouts to watch the Ghanaian in Denmark, with Ajax’s sporting director, Marc Overmars also visiting the Right to Dream Park.

Kudus, who was Kamaldeen’s teammate at Nordsjælland said in an interview with ESPN NL that he’ll use the international break in June to convince the winger.

“He’s part of the national team squad, so obviously I’m gonna see him as well, but at the end of the day making decisions comes with your own self and guts. Of course I can advise him based on my experience and what I have seen here. But at the end of the day, he’s a good kid he knows what he wants and I think he’s going to make the right decision.

Coming off the back of his first season, Kudus who now understands the Ajax system more, believes his national compatriot will be a perfect fit.

“Kamal is a fast winger, skillful, smart. Yeah I think he has everything. I think he’ll fit a lot in our style of play – especially when you are a winger and you’re fast, you can score goals, assist. So I think he’ll be a perfect player for us.”

Kudus won the league and cup double in Netherlands this season with Ajax scoring four goals and assisting three.

DISCLAIMER: The Views, Comments, Opinions, Contributions and Statements made by Readers and Contributors on this platform do not necessarily represent the views or policy of Multimedia Group Limited.
Tags:
kamaldeen sulemana
Kudus Mohammed