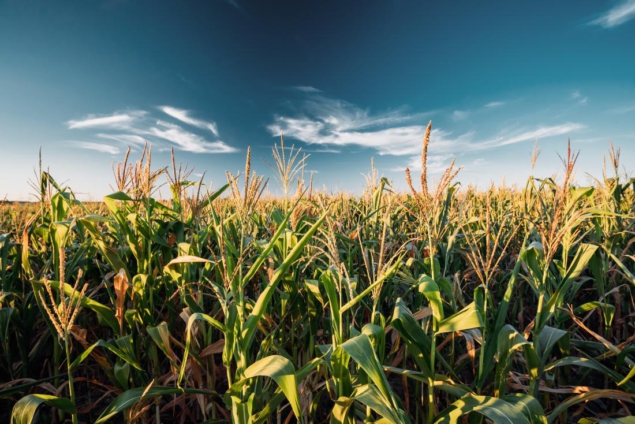 A field of GMO corn

A Plant Biotechnologist and Director of the Biotechnology and Nuclear Agriculture Research Institute, says moving biotechnology to the fields would help people, particularly farmers to appreciate the essence of Genetically Modified Organisms (GMOs).

Professor Kenneth E. Danso said, “The only way farmers in this country can adopt the technology is to move the crops to the field for the farmers to see.”

Speaking at the third edition of the Open Forum Agricultural Biotechnology (OFAB) media awards held in Accra on Monday, September 2, this year, Prof. Danso said, “biotechnology is a proven technology that can solve a myriad of challenges we are facing, not only in this country but worldwide as a result of the impacts of climate change on agriculture.”

He said “countries that are using or adopting biotechnology are making tremendous benefits exporting large quantities of their foods to other parts of the world,” noting that “unfortunately on our part, we have not been able to do that even though a lot of works have been done on biosafety.”

Prof. Danso explained that research on biosafety issues started in the country long ago and that many documents have been produced and published on the subject.

That, he said, considering the number of research and work done on biotechnology, he was expecting that the country by now would have adopted biotechnology to maximise the benefits associated with it.

According to him, with the work done on biosafety, the country was in a position where it could regulate GMO foods, explaining that “what is left now is to move the technology to the field.”

Prof. Danso believes that it was only when people see what was on the field that they would adopt the technology.

He has, therefore, appealed to the media in the country to help create awareness about the usefulness of biotechnology.

“Let people hear about the technology as you write,” he urged the media, adding “Let us do our very best to report on biotechnology.”

The OFAB Media Awards provide an opportunity to enhance knowledge-sharing and awareness creation of agricultural biotechnology that will raise understanding and appreciation of the technology and contribute to building an enabling environment for informed and timely decision-making.

A Staff Writer with the Graphic Business, a brand of the Graphic Communications Group Limited (GCGL), Ama Achiaa Amankwah Baafi, emerged as the overall winner, taking home a plaque, some cash and a hamper.

Other winners were Salifu Wononuo of Radio Waa and Ibrahim Abubakar of Myjoyonline.com.

He said there was no alternative to science towards human development urging the nation to embrace it to help propel development.

“No economy ever gets transformed without science,” he said, adding the country could develop its agriculture with the application of science.

Dr Yakubu has, therefore, called for a more productive debate on biotechnology to help move the country forward in terms of food security.

Speaking on the theme: “Promoting economic growth in Ghana through credible and balanced science reporting”, the Guest Speaker, Linda Asante-Agyei, who is also the Vice President of the Ghana Journalists Association (GJA), lamented the low coverage of agricultural biotechnology in the country.

According to her, many journalists turned to neglect or give very little attention to biotechnology reporting and rather focused on sports, the economy and politics.

She expressed the worry that even the very few agricultural stories were mostly sensationalised, creating fear and panic among the populace instead of informing and educating the public.

Mrs Asante-Agyei said farmers needed to be educated on new technologies in agriculture, hence urging journalists to research more to enable them to have better insights into agricultural biotechnologies.

“Journalists should have an attitude to research and analytic oriented,” she said, pointing out that journalists had greater responsibility in promoting agriculture in the country.

She expressed the hope that improving agricultural biotechnology could help to address food security in Ghana and by extension, Africa.

Mrs Asante-Agyei also commended OFAB Ghana for instituting the award scheme to recognise the work of journalists reporting on agricultural biotechnology in the country.
A former Director-General of the Council for Scientific and Industrial Research (CSIR), Prof. Walter Sandow Alhassan, bemoaned how the media report on biotechnology, particularly on

According to him, the way and manner in which biotechnology is reported in the media often leave the subject as a controversial issue.

That, Prof. Alhassan, prayed the media to help correct the numerous misconceptions associated with biotechnology as a result of wrong reports on GMOs.

“The way you report on biotechnology is still suffering,” he noted.

For his part, the Director-General of CSIR), Prof. Victor Kwame Agyapong, questioned the value systems of the country, regarding the low appreciation of researchers and journalists at the expense of beauty pageant shows.

According to him, it was about time the country took its researchers and journalists seriously considering their huge contributions to national development.

The Country Coordinator of OFAB Ghana, Dr Richard Ampadu-Ameyaw, urged journalists to take advantage of the media awards by reporting on biotechnology in the country.

DISCLAIMER: The Views, Comments, Opinions, Contributions and Statements made by Readers and Contributors on this platform do not necessarily represent the views or policy of Multimedia Group Limited.
Tags:
Abubakar Ibrahim
Biotechnology
Genetically Modified Crops
GMO
OFAB Awards