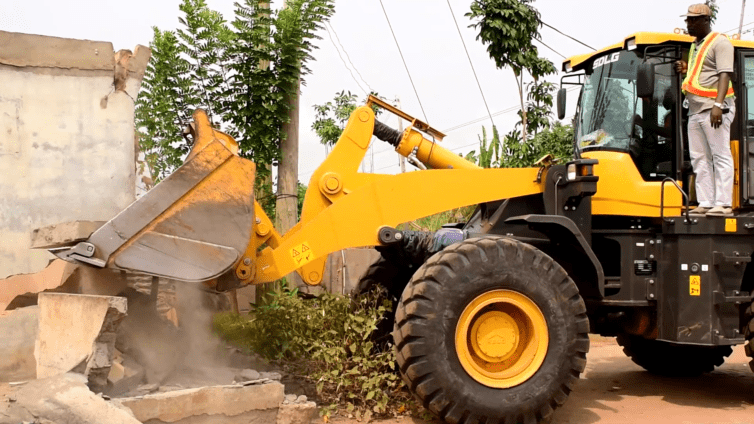 The Ho Municipal Assembly, under the leadership of Chief Executive, Divine Bosson, has begun a major project to open up the municipal capital and ensure an easy flow of traffic.

The Assembly, therefore, commenced the demolishing of houses constructed in areas demarcated for roads in about four suburbs in the Municipal capital, Ho.

The demolishing exercise began in the Dokpokofe suburb of the Volta Regional capital of Ho.

Houses that had road markings on them since 2007 were pulled down to make way for the construction of an access road that connects the School of Hygiene to the Ho Aflao road.

The MCE, Divine Bosson, underscored that it was necessary for the road to constructed, due to the fact that it leads to importance government institution and a developing area.

The demolishing exercise would affect about 10 households.

The affected resident argued that their grandfathers had settled here in Dokpokofe since 1964, hence it has become their home.

They have, therefore, appealed for resettlement since they have no means of reconstructing their households due to impoverished lifestyles.

“My grandfather lived here, he gave birth to my father, who gave birth to me and my siblings. I have also lived here and given birth before the government bought a portion of the land to construct the School of Hygiene. Now we are being asked to live here without any compensation.

“We are humans, is it good for them to sack us? They come here to ask us to vote during elections. Do they want us to live in the air and vote for them?” said Agnes Agoble, a resident of Dokpokofe.

The demolishing exercise was also done at Toviadzi to connect the Adehenu street to the Dome-Central Market road.

A new road was also opened behind the Ho Sports Stadium, to connect The Living Springs Church road to the Miracle Life Clinic road.

Major work is being undertaken to open up the Attachie street road at Ola top to serve as a by-pass and connect to the Some Down main road.

Over five structures are earmarked to be demolished during the exercise.

The Ho MCE, Divine Bosson said the Assembly would engage the affected residents and map out a resettlement plan for them.

However, roads users and residents have lauded the initiative and hope it would be extended to other parts of the municipality.