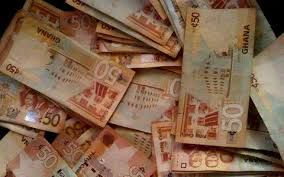 Documents available to Joy News reveal that the assembly spent half a million cedis of the Assembly’s Common Fund for 2014 and 2015 on funerals and donations to chiefs and queenmothers among other things at a time when the road infrastructure and other development projects are in dire condition.

Kwetey Nartey took a trip to Vugame in the Ho West District of the Volta Region and reports the roads are in such poor condition, no commercial vehicle has dared to travel on it.

The residents here are unhappy about the poor nature of the roads, he said.

"There are lots of potholes on the way. It will take you more than one and half hours for a trip that should ordinarily take just 45 minutes to complete," one of the residents complained to Kwetey Nartey.

According to Kwetey, the drivers using this stretch complain of bad business. Maintenance cost of the vehicles is high. But, that is the least of the worries of Justice Agbetor, a driver.

He told Nartey he is addicted to pain killers because of the severe body pains he endures as a result of using this road.

Construction works on the Tsolokpeta-Vame road which started a year ago has been suspended because there is no money. Workers are home waiting for the assembly to release funds.

Their only hope is the District Assemblies’ Common Fund. But the money has been used for something else.

Documents intercepted by Joy News reveal the assembly spent half a million Ghana cedis of its common fund on travels, transport allowances, donation to chiefs, sitting allowances for assembly members and furnishing of the DCE’s residence.

This year for instance, the assembly spent over GHc18,000 on fuel and transport, GHc36,345 on furnishing the DCE’s residence and the assembly, GHc5,672 on sitting allowance and over GHc6,000 on funeral donations and refreshment.

This is contrary to the Local Government Act 462, Section 87 (2) which states “all monies received by a district assembly from the common fund administrator shall be expended only on projects which form part of the approved development plan of the assembly."

The DCE won’t take full responsibility for the misapplication of the people’s money.

Sammy Ewoade the District Chief Executive for Ho West in confirmation of misapplication chronicled a number of activities, including funeral donations, sitting allowances the common fund had been used for.

He was however quick to blame the misapplication on delays in payment of the common fund.