The curtain came up on day two of the House of Representatives’ public impeachment hearings and, once again, the proceedings started off with a bang.

On Wednesday, it was disclosure of an overheard phone call between Donald Trump and US Ambassador to the EU Gordon Sondland during which the president may have asked about Ukrainian investigations.

Friday’s big developments included the White House release of a contradictory readout of the Mr Trump’s first phone call with Ukrainian President Volodymy Zelensky and a presidential tweet that had Republicans in Congress scrambling.

Just over an hour into Marie Yovanovitch’s testimony, Mr Trump launched the kind of Twitter fusillade that has become a regular part of his political repertoire. He questioned the ambassador’s competence, noted that the Ukrainian president spoke unfavourably about her and pointed out that he has the right to fire diplomats at will.

What makes the moment historic is that Committee Chair Adam Schiff gave Yovanovitch a chance to refute the president’s tweet almost in real time.

Democrats are already characterising the president’s behaviour as witness intimidation – and the latest attack by the president against one of his own government employees.

Republicans, whose reported strategy was to avoid directly impugning the reputation of a long-serving, well respected diplomat, will once again find a president who has changed the rules of engagement on the fly. 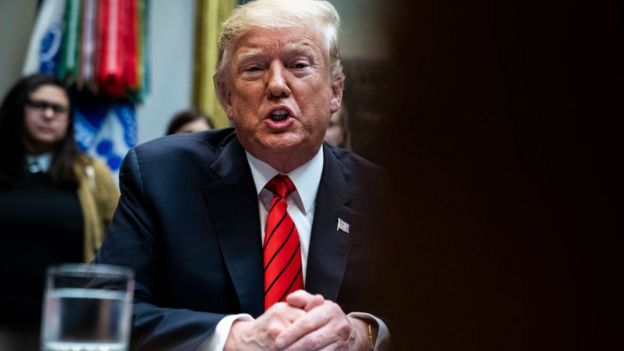 “I disagree with the tweet,” Republican congresswoman Elise Stefank told a reporter during a break in the hearing. “I think Ambassador Yovanovitch is a public servant, like many of our public servants in the foreign service.”

Mike Conaway, another Republican on the committee, said the president’s tweet was “not something I would do”.

On Wednesday, the White House said the president was not watching the impeachment hearings. On day two, the president is fully engaged. His tweeting became the big headline from the morning’s proceedings, helping to underscore Yovanovitch’s contention that the president himself was the driving force behind her removal.

Mr Trump may not be in the hearing room, but his presence is being felt.

2. The mystery of the ‘missing’ part of transcript

In it, the two exchanged pleasantries. Mr Trump congratulated Mr Zelensky on his election and suggested the possibility of a White House visit.

Mr Zelensky invited the US president to his inauguration in Kiev, and plugged his country’s delicious food and hospitality. Mr Trump agreed, citing his experience with Ukrainians in his days as a beauty pageant impresario.

The White House summary of the conversation released at the time, however, paints a different picture. It said Mr Trump “noted” that the Ukrainian election had been conducted in a fair and open process. It said he “underscored the unwavering support of the United States for Ukraine’s sovereignty and territorial integrity”.

And it said Mr Trump told Mr Zelensky that the two would work together “to implement reforms that strengthen democracy, increase prosperity, and root out corruption”.

None of those things happened.

It raises questions about why Mr Trump didn’t talk about corruption or endorse Ukraine’s territorial integrity in the call, particularly given Ukraine’s history of prosecutorial misconduct and Russian support for insurgents fighting Ukrainians in the nation’s eastern border region. The summary may have been what the US foreign policy team wanted the president to emphasise, but he did not.

The White House regularly produces summaries of the president’s conversations with foreign leaders.

The disparities between the April Ukrainian summary and the actual conversation may leave many Americans – and foreign leaders – wondering how much credence to place in those documents.