How Biden has more paths than Trump to 270 electoral votes 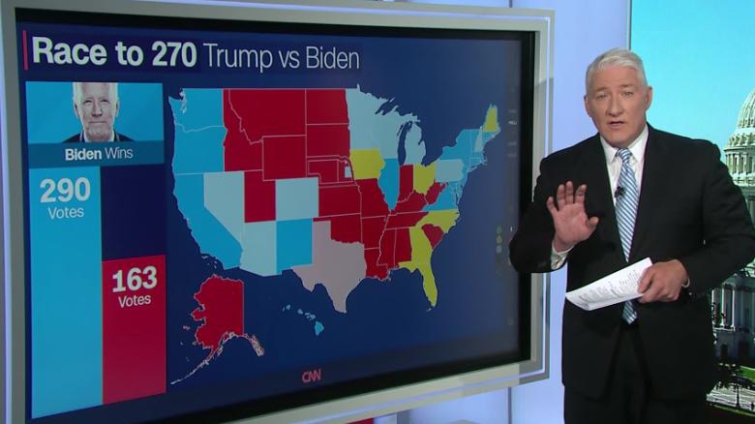 The average Pennsylvania poll puts Biden up by a similar margin.

What’s the point: Almost every article I write on this election starts with a phrase resembling “Biden is the favorite.” A big reason why he has the upper hand can be seen in polls like the Muhlenberg College survey out of Pennsylvania.

When you look at the Electoral College maps, Biden simply has more pathways to 270 electoral votes than Trump does at this point. If Trump wants to win, he’ll need to win a number of states Biden has a lead in, including Pennsylvania.

Just take the states where Biden has an advantage of 5 points or greater right now. These include all the states Hillary Clinton won four years ago, Michigan, Pennsylvania and Wisconsin.

Now, if Biden were to fail to win in Pennsylvania, it’s pretty easy to draw him up another map where he gets to an Electoral College majority.

Let’s say he holds the Clinton states and takes Arizona, Michigan, Wisconsin and Nebraska’s 2nd congressional district. Remember, Nebraska (like Maine) awards the winner in each of its congressional districts an electoral vote, and Biden is up greater than 5 points in the average of polls in the second district. Biden’s current average advantage in Arizona is 4 points.

What’s key to note here is that Pennsylvania has tended to be Biden’s weakest of the Great Lake (Rust Belt) battlegrounds. It wouldn’t be shocking if he loses there but holds on to Michigan and Wisconsin.

Additionally, Arizona doesn’t match the Great Lake (Rust Belt) battlegrounds of Michigan, Pennsylvania or Wisconsin either demographically or regionally. It’s much more racially diverse and is in the southwest. Polling errors tend to be correlated across regions and demographics. That means that there’s a decent shot Biden may hold on to Arizona, even if there is a miss that affects those Great Lake states.

Speaking of states that are in a different region and are more demographically diverse, take a gander at Florida and North Carolina. Biden is up by about 3 points in the average of polls in each state. Those races are well within the margin of error, but you could imagine Biden taking them even if Trump manages to get a lot more support from Whites without a college degree in the Great Lakes.

If you add, Florida, North Carolina and the states to the states Clinton won, Biden gets over 270 electoral votes without any of the Great Lake battlegrounds.

Trump’s paths to 270 electoral votes are far more limited. Even if he were to take the states where he leads and the ones where Biden currently has a less than 5-point advantage including Arizona, Florida and North Carolina, Trump would still fall short of 270 electoral votes.

Outside of a real long shot, what Trump needs to do is simple but difficult: take Arizona, Florida, North Carolina and one Great Lake battleground state in addition to most of the states he won in 2016.

The good news for Trump is that it doesn’t matter which Great Lake battleground state he takes. The bad news is that he was to win a number of states where he is currently trailing by 3 points or more and at least one state where he’s down by more than 5 points.

That’s not impossible. Trump still could pull it off.

Biden, though, must be considered the favorite because he just has many more chances to reach 270 electoral votes.

DISCLAIMER: The Views, Comments, Opinions, Contributions and Statements made by Readers and Contributors on this platform do not necessarily represent the views or policy of Multimedia Group Limited.
Tags:
Biden
Election
Trump