How ex-Gambia President Yahya Jammeh's US mansion was seized - MyJoyOnline.com

How ex-Gambia President Yahya Jammeh’s US mansion was seized 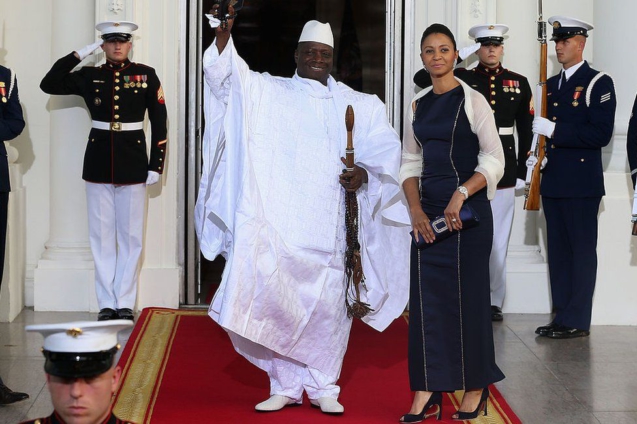 Yahya Jammeh and his wife, Zineb, were welcomed at the White House during an African leaders summit in 2014

Some amateur sleuthing and a chance encounter helped uncover how the former president of The Gambia had laundered his money by buying a luxurious property in the US.

Now a court has ruled that the $3m (£2.4m) mansion in the state of Maryland, near Washington DC, should be seized from a trust set up by ex-Gambian leader Yahya Jammeh.

Funds raised by the sale of the house should benefit those who were harmed by the former president’s “acts of corruption and abuse of office”, the US authorities say.

An investigation by the department of justice (DOJ) found that the money used to buy the six-bedroom house was raised through corruption.

“Maryland real estate is not a shelter for funds for corrupt rulers who have stolen from their countrymen,” said Selwyn Smith, one of the agents overseeing the case.

But it was investigations by campaigners a decade ago that first highlighted the issue.

Mr Jammeh’s 22-year presidency, which ended in 2017, was notorious for corruption and he also faced allegations of extensive human rights abuses including killing and jailing his critics.

More details have since emerged at Gambia’s Truth, Reconciliation and Reparations Commission, which this week recommended that he be prosecuted for “myriad crimes”. He has previously denied allegations of wrongdoing.

During his presidency, Gambian activists outside the country felt they had a responsibility to be the voice of the voiceless.

Sohna Sallah was one of them.

In 2010, a US-based Gambian newspaper reported that Mr Jammeh’s wife, Zineb, had bought a house in the upmarket Potomac neighbourhood, Ms Sallah told the BBC.

But its exact location was unknown.

“We scoured the archives of house sales in the area and it stuck out to us,” the 49-year-old said, referring to members of the Democratic Union of Gambian Activists (Duga).

The name of one buyer – the MYJ Family Trust – seemed odd. “We thought: ‘Somebody’s trying to hide that they purchased this house.'”

Also, Y and J happened to be the president’s initials.

Not living far away, Ms Sallah started taking trips down the winding Bentcross Drive to see if she could spot anyone.

“We used to drive around and one time the wife was actually pulling in and we’re like: ‘Yep, this is the house,'” she said with a chuckle speaking from her home in nearby Bethesda.

After that Duga members, who suspected that the money to buy it was acquired illegally, started holding regular protests outside the property.

They hung a Gambian flag on the gates and mocked up a sign saying: “For sale, by Gambians.”

They leafleted the neighbours trying to make them aware of what Mr Jammeh was accused of doing back home.

Ironically, one of the neighbouring homes was owned by Equatorial Guinea’s decades-long leader Teodoro Obiang Nguema, the Washington Post reported in 2017. He is also accused of corruption and human rights abuses, which he denies.

It is not clear if anyone in this exclusive area, where people value privacy and security, was that bothered.

Those inside the Jammeh house were irritated and sometimes called the police, according to Ms Sallah.

But the case for seizing the house only really took off once Mr Jammeh was forced to step down and go into exile in Equatorial Guinea after losing the December 2016 presidential election.

The new administration in The Gambia set up a commission to find out about the extent of corruption.

Reporting in 2019, it revealed looting on a colossal scale.

Curiosities, such as gold-plated pistols, were found among items recovered from one of Mr Jammeh’s homes in The Gambia, but it was his property portfolio that caught the attention.

The commission discovered that the former president had 281 properties in the country, as well as the one in the US and one in Morocco, and controlled more than 100 bank accounts.

There was no way that he could have afforded this on his salary and it concluded that he had misappropriated more than $300m.

The commission also uncovered that more than $1m had been diverted to Zineb Jammeh. Much of that money had been intended for charities, including Operation Save the Children Foundation.

“Nearly all the funds of the Foundation were wasted on events which from appearance were intended to boost the profile of Zineb Jammeh rather than help Gambian children,” said a government White Paper summing up the commission’s findings.

Mr Jammeh was also found to have extorted money in the form of bribes to grant monopoly licenses for the import of certain items, such as petrol. In addition, he used the threat of withdrawing those licenses to get more money.

And this was where the funds raised to buy the Potomac mansion allegedly came from.

Building on the work of the Gambian commission, the US DOJ detailed how the scheme worked.

In July 2010, the Petroleum Company was told that its monopoly import rights would cease at the end of the year.

The owner of the company then approached Mr Jammeh to guarantee those rights until 2014.

The following day an account was opened at that bank under the name MYJ Family Trust. Then a total of $1m was transferred into that account in three transactions by an employee of the Petroleum Company.

Finally, the money was wired to a real estate agent’s account in the US.

Over the following days, another $2.5m was transferred to the US and on 20 September the house in Potomac was bought for $3.5m.

It had all the trappings of a grand home in an area described by the Washington Post as one of the nation’s richest little towns. As well as the six bedrooms, it included an open foyer entrance, a movie screening room, a pool, a gym, a guest house and seven bathrooms.

It is not clear how often Mr Jammeh stayed there, but his wife was a regular visitor, according to Ms Sallah.

She would sometimes see her in the district’s shopping area. But those trips are no more.

And now with the stroke of a US judge’s pen, the house is no longer hers.

“Ex-Gambian President Yahya Jammeh and his wife thought that they could hide funds stolen from the Gambian people by buying a mansion in Potomac,” US Attorney Robert K Hur said when the civil action to seize the property began in 2020.

Responding to the decision to seize the property, Ms Sallah, who first raised the issue more than a decade ago, said she was “very pleased”.

“I’m happy that some semblance of justice has been done.”

Looking to the future “it would be nice ultimately if the money is returned to the custody of The Gambia so that the proceeds of the sale can go towards the victims of [Mr] Jammeh’s crimes”.

The DOJ has said that the property will be sold and has recommended that the money be used for compensation.

For the time being though activists living outside The Gambia can reflect that their efforts did not go to waste.