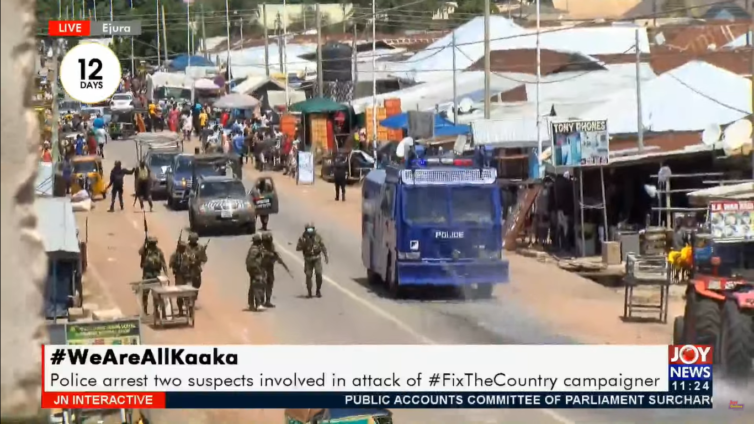 The Kontihene of Ejura has expressed shock over the methodology employed by security forces to restore order in the town in the wake of the youth in the area rampaging over the death of social activist, Ibrahim Mohammed, aka, Kaaka.

The Kontihene Nana Odiasempa Antwi Obugyei II, said, “obviously, MUSEC (Municipal Security Council) [deployed the security officers]. Because of the escalation of the problem yesterday, they had to bring in the military to support them. They came for peace, not to fight anybody. So I am very, very surprised.”

Speaking to JoyNews’ Erastus Asare Donkor, Nana Odiasempa Antwi Obugyei II, said Nananom of the area have tried their best to avert any more fatalities after the death of Kaaka, who has been described as a crusader for the community.

According to him, when the traditional leaders heard of Kaaka’s demise, they were worried that it could cause an uprising, thus, the Ejurahene, Barima Osei called on all the community members to ensure that peace prevails.

“You know the moment we [Nananom] heard that Kaaka was dead, we realised there wasn’t going to be peace. So we started talking to the various factions. And from yesterday around 2pm we have been talking to the youth. We have been calming them down. It is not easy but we tried our best.

“This morning, the Ejurahene spoke to a sizable number of the people, including the Zongo Chief and most of the elders. They assured us that calm is going to be maintained. But all of a sudden we heard that there was a confrontation between the youth and the peacemakers. Then I rushed to the scene,” he told JoyNews.

Two persons have died, while four others are injured after some protesting youth of Ejura Sekyedumase clashed with Military and Police personnel on Tuesday morning.

Since the death of the 40-year-old Ibrahim Mohammed, aka Kaaka, the youth say they are willing to sacrifice their lives until they get justice for him.

The youth stormed the Police station to inquire about the extent of investigation into the murder of their colleague. They stressed that they want the Police to leave no stone unturned in bringing the perpetrators to book.

Although the Police told them that two persons have bee arrested in connection with the crime, the agitated protestors said it was just a façade.

Pressing home their demand for justice, the youth hit the streets and were met by the Military and Police personnel.

Four soldiers were seen moving in a horizontal line with a police water cannon charging on the protestors.

Reacting to this, the Nana Odiasempa Antwi Obugyei II described the incident as unfortunate adding that “the youth are trying to avenge the death of one of their own, but have now recorded multiple injuries and deaths.

He further called on all Ejura residents to exercise patience and restraint about the matter.