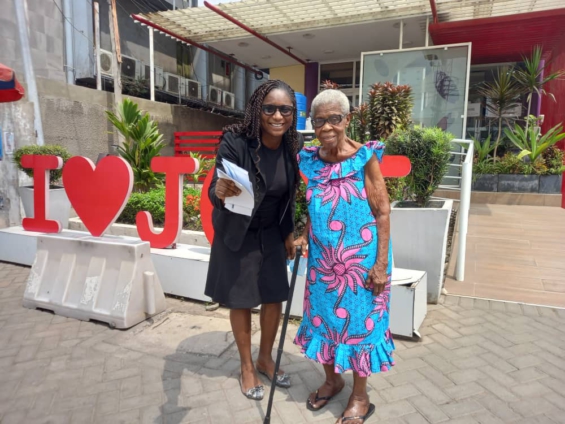 In times where weak school structures are collapsing and killing pupils, a 94-year-old retired teacher, Madam Alexina Adjah Cudjoe has donated her pension benefits to JoyNews to support The Multimedia Group’s Classroom Project.

Her donation comes after Multimedia launched an initiative to mobilize public support and local resources to help two communities to rehabilitate and rebuild their weak primary school buildings.

The Braman Jamara D/A Basic School in the Central Region and the Zoonayili E/A Primary School in Tolon in the Northern Region are the beneficiary schools under the project.

Explaining to JoyNews the motivation behind her act of charity, Madam Cudjoe said she finds it worrisome seeing school children studying in weak school buildings.

“I also have children in other classrooms so when I hear about it, I feel uncomfortable about it. So I felt like sending some money.”

The 94-year-old retired teacher also urged the general public to extend helping hands to people who are in dire need.

“Anybody who just hears about it and is also interested should do the same so our children will learn comfortably.”

The Project Lead at JoyNews, Emefa Ewoenam Atiamoah-Eli received the donation on Wednesday, February 2, at the premises of Joy 99.7 FM.

Mrs. Adjah-Cudjoe also extended her benevolence to a hole-in-heart patient whose story was told on JoyNews.

She was aided by one of her sons who told JoyNews, his mother has always been a fan of the station.

A total of GHS51,000 has been raised out of a target of GHS155,000 required for the two school blocks.  Work is currently underway at the Breman Jamara site. Your support is very much appreciated.

The Classroom Project, is under the theme, ‘Promoting Social Justice Through Philanthropy’.  It is supported by the STAR Ghana Foundation with funding from the Dutch Foreign Affairs Ministry.